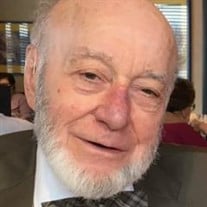 ZELMAN “ZOM” LEVINE Zom Levine passed away peacefully on January 7, 2021 at the age of 96. Preceded in death by his beloved wife, Beryl (nee Kall); parents, Louis Bessie (nee Cowl) Levine; brother, Ephraim; sisters, Annette and Beatrice. Survived by children, Cynthia, Debra, and Kreg (Lisa); grandchildren, Theresa (Reuben), Brandon (Jennifer), Trevor (Kelssee), Zachary (Tamar) Breanna and Isaak; great grandchildren, Kyle, Amanda, Brooke, Alec and Maddey. Zom was born on March 28, 1924 in Duluth, Minnesota. He began his entrepreneurial career at 8 years of age with his cousin Harvey, selling souvenirs on a street corner in Duluth. He started his first of six companies in 1946, moved to Minneapolis in 1960 and continued working actively in his businesses through 2018. Zom was a leader and innovator of advertising signs and neons for the brewing industry. Many of these signs he and his team created and manufactured are classics and can still be found in many establishments around the world today. He was also a leader and innovator in the toy and game industry. He introduced and brought to market the first Gumby action figure as well as the Barrel of Monkeys, Perfection, and Sequence games. He had many hobbies, including raising and showing Arabian horses on his farm, fine woodworking, boating and spreading joy. During high school, furniture pieces he built were displayed in the Duluth Glass Block department store windows. He took great pleasure traveling the Mississippi River and the Gulf of Mexico with his family on his boat. But he was most passionate about giving to others, whether it was his family, friends or playing Secret Santa to many children in need, including those who were in hospitals during the Christmas season. These hobbies stayed with him throughout his lifetime. Zom was a kind and most generous patriarch. A devoted husband, father, grandfather, and great grandfather. His love for his family knew no limits, and he held his many friends and those who worked with him in the highest regard. He will be greatly missed. Private family services were held. Donations preferred to Fisher Center For Alzheimer’s Research Foundation or donor’s choice.

The family of Zelman "Zom" Levine created this Life Tributes page to make it easy to share your memories.