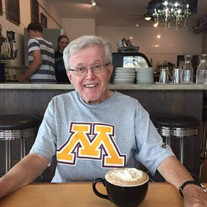 Thomas Heie of Minneapolis, MN, 79, died on December 28th, 2020. He had battled Parkinson’s Disease for approximately 15 years and died due to complications related to progression of the disease. Tom was born November 8th, 1941 to Andrew and Genevieve (Ware) Heie of Anoka in Minneapolis, MN. He was the eldest of four children and raised in Anoka. He graduated in 1959 from Anoka High School. Then he received his Bachelor of Arts in French from the University of Minnesota. He later received his Masters of Arts in English in the 1970s. In 1965, Tom married Mary Boller, and together they raised three children in Anoka: Jacqueline (Jacqui), Jonathan (Jon) and Marguerite (Margi). Their first son Gerard died in 1968 at 22 months old. They were married 32 years. Tom was a teacher through and through starting with French at Barrington High School in Illinois, then Prior Lake High School in Minnesota. He spent the majority of his career in the Anoka-Hennepin School District teaching at Coon Rapids Junior High (French and then English), finishing at Blaine High School. He finally “graduated from high school” aka retired in spring of 2002 at age 59. He had a flair and gift for teaching. If you spent any time with him, you ended up learning something through his story-telling and conversation. Tom was a lover of the finer things in life. He loved classical music, writing, reading, playing the piano, creating art, languages, traveling the world, volunteering, and deep philosophical discussions. Tom created Sidewalks, a literary magazine where he edited and published poetry, short prose, and art, including occasional works of his own. He was also a life-long learner, taking many writing classes, and participated in many writing groups, book clubs, and Bible study groups. He also enjoyed joking around, teasing those he loved, and a good treat. He would never turn down a cookie or a baked goodie. He “loved all of the cookies of life.” Tom was also known for his kindness and generosity. He donated to many service organizations and enjoyed volunteering his time. Throughout the eighties and nineties, he read books onto tape for the blind. Once he was retired, he tutored elementary school kids at Risen Christ Catholic School. He also volunteered in Guatemala before his mobility became more impaired. Later he helped out at as a mock patient at Concordia University—St. Paul in the Doctor of Physical Therapy Program fulfilling his passion for education later in life. Tom lived by example of the importance of finding and living your truth. In 1997, he came out that he was gay and found love with Ed DuBois. Ed has been a dedicated partner for 23 years, and has become a part of Tom’s kids’ lives as well. Tom will be missed greatly as he has touched the lives of many through his wisdom, humor, spirit, artistic talent, and love. He showed us the importance of adapting through life and living fully with any limitations you are given. He could find humor throughout his life and kept “looking up, even if you don’t think you can.” Tom is preceded in death by former spouse, Mary Heie; son, Gerard; parents, Andrew and Genevieve; and brother, Dennis. He is survived by his partner, Edward DuBois; children, Jacqueline, Jonathan (Wendy), and Marguerite; grandchildren, Madeline and Jacob Heie, Devin and Freya Hanson; sisters, Janet (James) Thole, and Darlene (Steve) Joecks, and numerous nieces and nephews. Memorial service SATURDAY, June 12, 2021 at 11:00am, CHURCH OF THE HOLY NAME, 3637 11th Ave. S., Minneapolis, MN 55407. Visitation one hour prior to the service at the church. Interment at Calvary Cemetery following lunch, approximate arrival time, 2:30pm. In lieu of flowers, donations in memory of Tom to: https://www.parkinson.org/research https://annecarlsen.org https://loft.org/join-support Michael J Fox Foundation for Parkinson’s research

Thomas Heie of Minneapolis, MN, 79, died on December 28th, 2020. He had battled Parkinson&#8217;s Disease for approximately 15 years and died due to complications related to progression of the disease. Tom was born November 8th, 1941 to Andrew... View Obituary & Service Information

The family of Thomas Heie created this Life Tributes page to make it easy to share your memories.