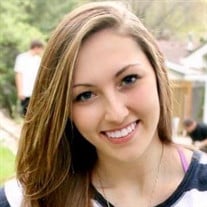 Taylor Nicolle Borkon Lieber Age 22, of Edina, passed away after a courageous 7 year battle with cancer on August 12, 2019, the fourth anniversary of her first bone marrow transplant. Born December 6, 1996. Preceded in death by sister, Rachel; and grandparents, Dr. Irving Borkon and Patricia Lieber. Survived by parents, Lauren and Dan Lieber; brother, Michael Lieber; grandparents, Sherrill Borkon, Judy Lieber and Ralph Lieber; uncle, Bard Borkon (Julie Silverman, Josh and Jack Borkon) and uncle, Josh Lieber (Danielle, Cami and Remy). Taylor illuminated the lives of all those who loved and knew her. Her beautiful singing and guitar playing will be remembered through her performances at Edina High School, Temple Israel, and CCRF Dawn of a Dream. Taylor was an accomplished athlete, playing volleyball, basketball, softball and soccer. She also loved her time with family and friends on Leader Lake and in the BWCA. An outstanding student, Taylor graduated EHS as an Edina Scholar and on time with the class of 2015, while fighting and recovering from Ewing’s Sarcoma. She then battled secondary high-risk AML, having her first bone marrow transplant on August 12, 2015, and her second BMT on February 12, 2019. While in remission, Taylor went on to excel at the University of Minnesota and St. Catherine University, where she was accepted into the honors program in nursing. During college, Taylor received her Certified Nursing Assistant’s certification and upon graduation, she planned to become a pediatric nurse anesthetist. Taylor also spent several summers at Camp Mak-A-Dream, where she connected with many inspiring young cancer patients and survivors. Her family and friends will always remember Taylor’s warmth, sense of humor, and relentless spirit to conquer cancer. Taylor was an Ambassador to many cancer charities, including CCRF, where she was a Board Member on the SOAR Leadership Council. The family wishes to thank the incredible doctors, nurses and staff at Masonic Children’s Hospital, whose tireless efforts, skill and compassion allowed Taylor to continue to shine her light for the past four years. Funeral service Thursday, August 15, 2 p.m. at Temple Israel, 2323 Fremont Ave S, Minneapolis 55405. Donations preferred to: Children’s Cancer Research Fund, Check Memo: “Team Taylor,” 7301 Ohms Lane, Minneapolis, MN 55439. SHIVA/community visitation Thursday and Saturday, 7 p.m. at Temple Israel.

The family of Taylor Nicolle Borkon Lieber created this Life Tributes page to make it easy to share your memories.

Taylor Nicolle Borkon Lieber
Age 22, of Edina, passed away after...