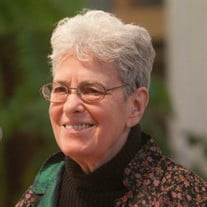 Susan Hasalo Sojourner, age 79, of Minneapolis, passed away on December 4, 2020. Sue loved fiercely, shone brightly and fought tirelessly for justice throughout her life, for civil rights in Holmes County, Mississippi and also for women’s liberation and LGBTQ+ rights during her years in D.C. and Duluth. Sue’s fighting spirit has always been evident, even since her early days as Susie Sadoff, a dungaree-clad ballplayer on the sidewalks of Chicago’s South Side. Her family -- mother Bess, father Bernard, sister Muriel, and brother Bud -- moved around a lot, but Sue always looked back fondly on her high school days in Marblehead, Massachusetts. Family lore has it that her outgoing personality earned her the title “most popular” in the Marblehead High Class of 1959. Sue’s college years began at the University of Wisconsin, Madison, then Stanford, and ended at UC Berkeley with a bachelors in journalism. In California, she worked as a computer and met a young nuclear physicist, Henry Lorenzi of Pittsburgh, Pennsylvania. Henry and Sue married in 1964 before heading to Holmes County, Mississippi where they spent the next five years working with local Black folks in their struggle for voting rights and equality. The local people of Holmes County's movement built one of the strongest chapters of the Mississippi Freedom Democratic Party (MFDP), elected Robert G. Clark, Jr. as the first African-American Mississippi state legislator since Reconstruction, and started one of the nation’s first Head Start programs. Sue acted as witness and ally, intentionally documented meetings, photographed local activists, recorded dozens of hours of reel-to-reel tape of meetings and interviews, saving everything she could. The records formed the raw material for her book, Thunder of Freedom: Black Leadership and the Transformation of 1960s Mississippi, written with Cheryl Reitan, a permanent exhibit for an organizer training center Got to Thinking: How the Black People of 1960s Holmes County, Mississippi Organized Their Civil Rights Movement, and The Some People of That Place traveling exhibit. The book was a Minnesota Book Award finalist and profiled by Zinn Education Project and Teaching for Change. Excerpts including photos of Holmes County’s Alma Mitchell Carnegie, Hartman Turnbow, and Ralthus Hayes are on pages 18 to 23 of MFDP Chair Lawrence Guyot’s newsletter. In 2013, the Mississippi Legislature honored Sue and Henry for their years working with “black Holmes County Mississippians to build a viable, powerful and effective political and social movement.” The Mississippi Civil Rights Museum in Jackson includes many of her photos of the leaders and community members active in Holmes County’s civil rights organizing. She was profiled by the Veterans of the Civil Rights Movement and the African-American Registry, which also captured her discussing the Jewish identity that led her to identify with the need for liberation. The raw materials documenting Holmes County’s freedom fight fill over 100 boxes and are preserved in a University of Southern Mississippi special collections archive. After moving to D.C., Sue turned her energies toward the women’s liberation movement and helped create resources for feminist readers and writers. Sue and Henry lived in a commune in the Eastern Market neighborhood. She started the First Things First fe-mail order book company in 1971, as profiled in the New Woman's Survival Catalog. A local gift and crafts store, Lammas, owned by Sue’s friend, Mary Farmer, started selling her stock and evolved into D.C.’s leading feminist bookstore. Sue and Henry decided to fight the patriarchy by taking a new last name, Sojourner, inspired by abolitionist and feminist Sojourner Truth. Later, Henry and Sue welcomed son, Aaron, and raised him in D.C. She came out and became active in D.C.’s lesbian community, volunteering at off our backs (oob) and celebrating High Holy Days at Bet Mispachah. After Henry’s passing, she raised Aaron as a single mom with lots of support from friends and family. During these years, Sue worked as a temp then copy editor then associate editor at the Center for Strategic and International Studies’ Washington Quarterly. She commuted by bike to work before it was cool. She played women’s softball and soccer and coached Aaron’s Soccer on the Hill Red Barons. She was a loving, fun, and energetic mother and friend to many. She lived with bipolar disorder. In the mid-1990s, Sue moved to Duluth to be near her sister, Muriel Abram, and dig into her archives to write a book about the Holmes County movement. She took half a year off and moved to Chicago to help care for her new grand-daughter. She and her indispensable collaborator, Cheryl Reitan, wrote Thunder of Freedom and she was active in many Duluth community activities and institutions, including the Washington Studios Artists Co-op and Temple Israel, which had provided material support to the Holmes County movement decades before. In 2014, Sue was honored for her contributions to civil rights by Duluth’s Clayton Jackson McGhie Memorial, as described in the Duluth News Tribune. In 2015, Sue moved to Minneapolis to spend more time with Aaron, a labor economist at the University of Minnesota, her daughter-in-law Kathy Cassidy, and her grandchildren, Nora and Naomi. Before the pandemic, the grandkids passed many lovely afternoons eating sweets and playing cards with Sue and Kathy’s mom, Susan Cassidy. COVID killed Sue, though peacefully. Sue will be dearly missed. May her memory be a blessing. Sue is also survived by her loving sister, Muriel Abram, currently living in New York, and many nieces, nephews, cousins, and extended family. Online funeral service 11:30 a.m. Central on Monday, Dec. 7. Online shiva Monday at 5 p.m. These events are open to anyone who wants to pay their respects. Email [email protected] for links. Memorials preferred to DuluthNAACP.org or to support civil rights movement research at the University of Southern Mississippi Special Collections archive, which holds the Henry and Sue [Lorenzi] Sojourner Civil Rights Movement Collection among others.

The family of Susan Hasalo Sojourner created this Life Tributes page to make it easy to share your memories.

Susan Hasalo Sojourner, age 79, of Minneapolis, passed away on...