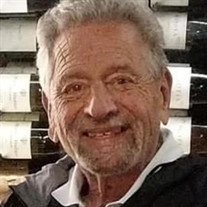 Dr. Sheldon Jay Segal, age 85, of Minnetonka. He passed away peacefully early Monday afternoon, February 14th, fittingly holding the hand of his beloved wife of 62 years, Carol. A ten year battle with Alzheimer’s disease robbed him of so much, but he never lost his quirky sense of humor. He will be remembered for his intellect, sharp wit, wry gap tooth smile and deep love of and devotion to, raising a close-knit family. Sheldon was born December 31, 1936, in Minneapolis, MN, graduated from high school at age 16, went to the University of Minnesota, and began medical school there just three years later. By the time he was 23 years old he had become the youngest licensed physician in Minnesota and married University of Minnesota nursing school student, Carol Straus, whom he frequently referred to in jest as “my first wife, Carol.” He was an avid sportsman, winning tournaments in bowling, racquetball, and becoming a world ranked backgammon player. He was passionate about travel and family and managed to combine those two passions into many memorable family vacations. With left-over educational credits under the GI bill from his service as a Captain in the U.S. Army, Sheldon learned how to fly airplanes, eventually owning his own plane, restroom not included, to the chagrin of his family. He served as a general and vascular surgeon to many Minneapolis hospitals over a nearly 50 year career. In 2010 he was inducted into the Minnesota Boxing Hall of Fame inaugural class as the first and only ringside physician and one of only three non-boxing members to be inducted. Survived by his loving wife, Carol; children, Steven and Ellen Segal, Thomas Segal, James and Tamra Segal, Lauri Segal Simons and Mike Simons; and six grandchildren, Ryan (Amanda), Lindsey, Samantha, Zachary, Evan and Cole; sister, Nancy Hersk; and sisters-in-law, Faye Segal and Brenda Straus; and loving nieces and nephews. He was preceded in death by his parents, A. Ray and Sophie Segal; brother, Alan; and Infant daughter, Jill Lynn. Much gratitude for the loving care and companionship of Adrianna, James and the teams at English Rose Home Care and Allina Hospice. Memorial donations may be made to the charity of your choice. Funeral services 2:00 pm on WEDNESDAY, February 16th, at ADATH JESHURUN CONGREGATION, 10500 Hillside Ln W, Minnetonka. The family will be sitting Shiva at Adath Jeshurun Congregation at 7:00pm on Wednesday, February 16th and Thursday, February 17th. Masks and proof of vaccination will be required to attend the funeral or Shiva in person, register at https://www.eventbrite.com/e/269688725237 to attend in person. Service will be live-streamed at https://www.adathjeshurun.org/livestream.html Shiva available on zoom, email [email protected] to receive the Zoom link.

The family of Dr. Sheldon J. Segal created this Life Tributes page to make it easy to share your memories.