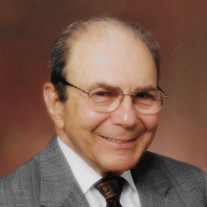 Sheldon L. Mandel Obituary Sheldon L. Mandel, M.D., age 97, of Minneapolis, passed away peacefully April 30, 2020. “Doc” was born December 6, 1922 in Minneapolis, to Stelle and Maurice Mandel. He was one of eight children, two of which died after birth. Preceded in death by his wife, Patricia; his parents; two infant siblings; brothers, Seymour, Nisson and Irwin; sisters-in-law, Marjorie and Petrena; brother-in-law, Raphael. Survived by loving daughter, Melissa and her husband Jon Crow; grandson, Jack; granddaughter, Piper; beloved sisters and sister-in-law, Lois Weisberg, Diane Tygier and Sandra Mandel; brother-in-law, Roger Tygier; and many, many adoring nieces, nephews, cousins and friends. Sheldon was educated in Minneapolis public schools and graduated North High School in 1940. He entered the University of Minnesota in 1940, where he earned a B.A. and a B.S. in 1943, a B.Med. in 1946, and an M.D. in 1946. He had rotating internships at the University of Oklahoma, 1946-47. He was a resident in Dermatology at the University of Minnesota Graduate School and Veterans Hospital, Mpls, 1949-1951. He was a preceptee of Dr. Henry E. Michelson in 1951, then associated in practice with Dr. Michelson for 25 years. Dr. Mandel worked in private practice in general Dermatology in Minneapolis from 1951-2011. He merged his practice with Dr. Arthur Ide, III, in 1992. He was a member of the Royal Society of Medicine. Sheldon was commissioned 2nd Lt. Medical Services Corps in May 1943, then resigned to enter Medical School. He subsequently enlisted in the US Army June 1943 to continue schooling in the Army Specialized Training Program. He was commissioned 1st Lt. USA on graduation, May 1946. He completed training in Dermatology at Valley Forge General Hospital under the tutelage of the Department of Dermatology at the University of Pennsylvania and promoted to Captain in 1948. Between 1947-1949, he had a tour of duty in a M.A.S.H. unit aboard the hospital ship USS Comfort in the North Atlantic and Germany. Dr. Mandel was appointed Assistant Instructor in the Department of Dermatology, University of Minnesota in 1953; Professor in 1970; then Adjunct Professor in 1990. He conducted seminars in Dermatology, basic sciences and clinical Dermatology, lectured to graduate and undergraduate classes. He had regular weekly attendance at the Clinical Conferences in Dermatology at the University of MN and at Mayo Clinic Scottsdale, AZ during the winter months. He wrote and published several articles in medical journals. He possessed incredible skill and acumen in Dermatology. Sheldon was described as a kind, gentle, humble, and dapper gentleman. He was caring and patient, and took sincere interest in everybody around him. His patients would come into his office just to see him and talk. He was extremely devoted to his family; all of his brothers, sisters, nieces, nephews and cousins. He had a special relationship with each member individually. His daughter, Melissa, was the light of his life and the twinkle in his eye. He gained an incredible son-in-law, Jon, and got the gift of two amazing grandchildren, Jack and Piper, who he loved to watch grow. He married Patricia Evans in 1979, and enjoyed 21 years of marriage. They found Scottsdale, AZ to be their winter haven. Sheldon was a quiet man, but had so much to say. He had a quick, dry sense of humor and was a master of the pun. He was an avid reader, played golf, wrote poetry, painted, played piano, and raised roses in his AZ garden. He was a lifelong learner, mentor and teacher. The family gives a special thank you to his “other” daughters; Doris Smith-Brown, Comfort Dumuyah, and Eliza Winford, who took the best care of Sheldon these last few years and loved him as their own Dad. Also a thank you to the Water’s on 50th, where he lived; and to all the nurses, doctors and staff at Methodist Hospital, where he received the best care when he went in with COVID19. Due to COVID restrictions, the graveside service will be held Sunday, May 3, at 12:00 noon and can be viewed by emailing [email protected] or [email protected] for a Zoom link to watch the service from your home. Shiva will be held on Sunday, May 3rd and Monday, May 4th, at 7:00pm via Zoom. Memorials preferred to The UMN Mandel Dermatology Lectureship, give.umn.edu. PO Box 860266, Minneapolis, MN 55486.

The family of Sheldon L. Mandel created this Life Tributes page to make it easy to share your memories.