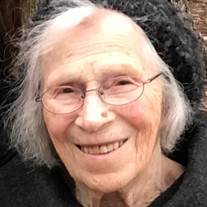 Sabina Szwarc Zimering, 98, passed away peacefully in her sleep on September 6th, 2021 in her home of sixty years in St. Louis Park. She was born on February 24th, 1923 in Piotrków Trybunalski, Poland, where she had a happy childhood with her mother, father, sister, Helen, and brother, Nathan until the beginning of World War II. As teenagers, Sabina and Helen survived the Holocaust with false IDs provided by their courageous friends, Mrs. Justyna and her daughters, Danka and Mala. Despite the immense pain and loss she experienced during the Holocaust, Sabina refused to let the past impede her future. Shortly after the war, she fulfilled her dream of becoming a physician. She attended medical school in Munich where she met Ruben Zimering, her husband of 62 years. The couple immigrated to Minnesota in 1949, joining Sabina’s siblings Helen and Nate. Ruben and Sabina settled happily in St. Louis Park where they raised their three children, Rose, Mark and Bonnie. Sabina enjoyed practicing medicine as an Ophthalmologist for 42 years. Upon retirement she began a new chapter in her life. At 75 she wrote her memoir, Hiding in the Open, where she recounted her harrowing journey, surviving Nazi-occupied Europe. With her book, Sabina kept the memory of her loved ones alive and educated multitudes of young people about the atrocities of the Holocaust. Sabina traveled the country speaking to thousands of audiences in schools, churches and various organizations. In 2004 the History Theater adapted her book into a play, which captivated audiences during several successful runs. It is still being performed by theater groups and high schools around the country. In addition to her work and family, Sabina loved world travel, the arts and, above all, good food. She is remembered by all as an endlessly empathetic, magnanimous, and resilient soul. Sabina was an advanced humanitarian. She managed to take the darkness of her past and use it to become a beacon of light, stability and joy for those around her. Sabina is preceded in death by her beloved husband, Ruben; her sister, Helen and brother, Nate. Sabina is survived by her three children, Dr. Rose Zimering, Dr. Mark Zimering (Laurie), and Bonnie Zimering Bottoms (Richard Erickson) as well as six grandchildren, and four great-grandchildren. To honor her legacy, please join Sabina’s family and friends on Friday September 10th at 11:30am at BET SHALOM CONGREGATION, 13613 Orchard Road, Minnetonka. Indoor portion of the service will be short, masked and distanced. Outdoor ceremony to follow at Adath-Yeshurun Cemetery, 5605 France Ave S, Edina, MN 55410. Shiva prayers will be held outdoors on Saturday at 7pm at 13442 Larkin Circle in Minnetonka. Funeral and Shiva both available on zoom, email [email protected] for the links. Donations can be made in Sabina’s honor to World Without Genocide (Worldwithoutgenocide.org) or the History Theater (Historytheater.com)

Sabina Szwarc Zimering, 98, passed away peacefully in her sleep on September 6th, 2021 in her home of sixty years in St. Louis Park. She was born on February 24th, 1923 in Piotrków Trybunalski, Poland, where she had a happy childhood with her... View Obituary & Service Information

The family of Sabina Szwarc Zimering created this Life Tributes page to make it easy to share your memories.

Sabina Szwarc Zimering, 98, passed away peacefully in her sleep...