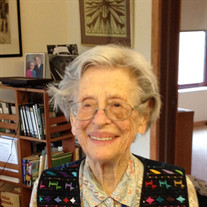 Ruth M. STEIN, age 93 of St. Paul MN, formerly of Minneapolis, died on January 31, 2018 surrounded by her loving family. Ruth was born on October 21, 1924 in Detroit MI to Louis and Goldie (Gornbein) Meyerson. At birth Ruth weighed 2.5 lbs. and was sent home from the hospital to die. But her grandmother put some feathers in a cigar box to hold her, sat with her by the fire and brought her slowly to health. She was described by her family as a “fork with hair.” Ruth always had a sense that her life had purpose. As she once said, “I always believed that God looks after fools, children, and me.” She was joined 5 years later by her sister Florence. They grew up surrounded by their extensive family in Detroit. Her entire life was grounded in family. As a child Ruthie appeared on the stage in Detroit’s Yiddish theater. Ruth was also a fan of the Detroit Tigers. She was especially happy when they won the World Series in 1935, led by her beloved Hank Greenberg. Radio was an important part of her life; she remembered listening to Joe Louis fights, the Lindbergh case, and Al Jolson songs. At the age of 8, her family moved for a year to a utopian farm called Sunrise Farms near Saginaw, Michigan. She lived with the other children in “the big house.” Thirty years later, when first visiting a kibbutz in Israel, she was overwhelmed with memories of “the farm.” In 1939 the family relocated to Los Angeles CA. As Ruth recollected “Los Angeles in 1939 was absolutely the promised land.” Ruthie fondly remembered living in the multi-ethnic neighborhood of Boyle Heights, surrounded by her family. At Roosevelt High School, Ruth was her class valedictorian. But she remained Ruthie, and would often cut classes to go to the movie studios with her friends to get autographs from stars. Also at Roosevelt High School Ruth met Marvin Stein. They both went to UCLA, where they fell in love and married on July 15, 1944. She received her B.A. in International Relations. Marvin enlisted in the army and was stationed at Camp Crowder, MO. Ruth went with him, working as a dental assistant in nearby Neosho. After World War II, they returned to Los Angeles, where Marvin earned his Ph.D. in mathematics and Ruth taught elementary school on an emergency teaching credential granted because she was fluent in Spanish. She loved teaching. In 1948 they welcomed their daughter Tamar, followed by Eugene in 1950. In 1952 they moved to San Diego CA. Jerry was born in 1953. In 1955 they moved to Minneapolis. Characteristically, she threw herself into Minnesota life. While Marvin taught at the University of Minnesota, Ruth raised three children, engaged in many activities, including participating in the DFL, League of Women Voters, the cooperative nursery school, the PTA, and leading Brownie and Girl Scout troops. The math department where Marvin taught became their adopted family. In 1963 the family spent a year living in Rehovot Israel. Israel became their third home (after California and Minnesota). They returned nine times over the course of their lives, often to live for many months. During summers the family would drive to California and stay for two months. She said, “I wanted the kids to know their family” and they did. Ruth was fluent or could get by in at least ten languages, including English, Yiddish, Hebrew, Spanish, French, Italian, Dutch, Portuguese, German and Middle English. She believed that if she spent 3 or 4 weeks in any locale she would be able to communicate with the people who lived there in their own language (and we all believed it too). After her youngest child started elementary school, Ruth returned to teaching. She also went back to school, earning a Ph.D.in Education from the University of Minnesota in 1970. She specialized in children’s literature. Ruth taught children’s literature at the University of Minnesota and Macalester College. She was the co-author of Tell Me How the Sun Rose, a textbook used nationally. She also wrote the column “Book reMarks” for 7 years, reviewing new children’s books for the magazine Language Arts. Publishers, hoping she would review their new books, for many years sent her every new children’s book, which she would give away to local schools, libraries, and her grandchildren. Ruth studied in Israel in 1971 and 1972, and in 1979 won a Fellowship at the International Youth Library in Munich. In later years Ruth was a docent at the Weisman Museum and Landmark Center. She read to kids in local elementary schools. She and Marvin continued to go to California every year. She continued to invest her time, intelligence and energy in her grandchildren and great grandchildren, who loved her dearly. Ruth lived the last years of her life at the Sholom Home East in St. Paul, first with Marvin and then by herself. While diminished in other ways, she retained her ability to bring delight, joy and humor into the lives of others. Wherever Ruth went she made lifelong friends, while remaining close to her extended family. For all of Ruth’s brilliance and energy, she retained a straightforward philosophy of life: If you have “food in your mouth, a place to live, and people who love you, you will come out all right.” Ruth is preceded in death by Marvin, her husband of 70 years, her beloved son Eugene, her parents and younger sister, Florence Ross. She is survived by her children Tamar Stein (Abram Edelson) and Jerry Stein (Margy), and daughter-in-law Sandi Stein (John Gary), as well as her adored grandchildren Jennifer Edelson (Greg Wagner), Jordan Stein (Carrie), Nathaniel Bennett (Sharon Stanley), Libby Edelson (David), Sarah Stein (Rob Vork) and Ben Braden Stein. She is also survived by her eight amazing great-grandchildren Elijah Wagner, Gabriel Wagner, Sefirah Stein, Max Vork, Aryeh Stein, Zvi Stein, Saul Stanley Bennett and Wilder Marvin Edelson. Ruth will also be missed by her brother-in-law, nieces, nephews, cousins, her extended family in Southern California, and many friends in the Twin Cities and around the world. We will cherish her memory always.

The family of Ruth M Stein created this Life Tributes page to make it easy to share your memories.