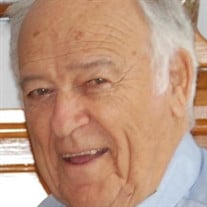 Robert B. Perwien of Coconut Creek, Florida, passed away August 8, 2020. Bob was born in St. Paul, Minnesota. He lived a long and full life. He met his future wife, Ruth Meltz, at a Jewish youth dance. After serving our country in the Army during World War II, he attended the University of Minnesota and married. As an engineer he joined his father’s company, Fuel Economy Engineering, building barracks for the Army. He became an entrepreneur, owning several marine businesses. He relocated to south Florida, where he owned and managed numerous apartment buildings. Bob never met a stranger; he loved to talk. His wife, Ruth, taught him to dance and they were always the first on the dance floor and the last to leave. His sisters loved to dance with him whenever the opportunity arose. They hosted many dance parties at their home. In Minnesota he loved gardening, boating, and fishing. In south Florida he was active in the American Legion and was the Commodore for many years. Bob and Ruth were socially active, entertaining in their home, availing themselves of the arts, and as members of the Latin Club, ballroom dancing with friends. In the Wynmoor retirement community Bob was active in numerous clubs – “Wood-Working”, “Fishing”, “Nature”, “Live, Laugh, and Love Moor”, and “Pennsylvania”. He was also an officer of his condominium association. He had many friends there. Family meant the world to Bob and he cherished them. He would travel every year to spend time with his children and grandchildren that lived in other states. He was famous for his stories that he shared. His face would light up when talking about his children and grandchildren; he was so proud of them all. Survivors include his children; Mickey Perwien, Rena Perwien and fiancé Donnie Jeffcoat, Dr. Jonathan Perwien and wife Lori Aptekar Perwien; 4 grandchildren; Sarah Perwien, Micah Perwien, Joshua Perwien, and Rachel Perwien; siblings, Nadine Rosenberg and Helene Ginsburg. He was preceded in death by his beloved wife of 49 years, Ruth; siblings Joan Slacter, Donald Perwien, Michael Perwien, James Perwien, and Edmund Perwien. He was the “favorite Uncle Bob” to numerous loving nieces and nephews; and he was loved by his many friends. He will be missed by all. Funeral zoom 11:00 A.M. (CST) on SUNDAY, August 16th. In lieu of flowers, the family asks that donations be directed towards the Jewish National Fund (jnf.org) or the Wounded Warrior Family Support (wwfs.org). Please email [email protected] for funeral zoom link.

Robert B. Perwien of Coconut Creek, Florida, passed away August 8, 2020. Bob was born in St. Paul, Minnesota. He lived a long and full life. He met his future wife, Ruth Meltz, at a Jewish youth dance. After serving our country in the Army... View Obituary & Service Information

The family of Robert Perwien created this Life Tributes page to make it easy to share your memories.

Robert B. Perwien of Coconut Creek, Florida, passed away August...