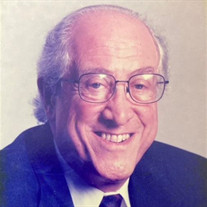 Robert “Bob” Latz, of Minneapolis, died on April 19 at age 91. Bob lived a life filled with deep love for his wife of 60 years, Carolyn; his four children, Ron (Julia), Marty (Linda), Mickey and Shari (Mike Rothman) and his eight grandchildren, Nate, Miya and Yana Latz; Jason and Valerie Latz; Sophia, Adam and David Rothman. They all represent his life and legacy. Bob devoted his life to making this world a more just, fair and better place for everyone, but especially for those who could not stand up for themselves or were subject to discrimination. While a true leader and trailblazer in law, politics, government and community, Bob’s first and most enduring love was for his partner in all things, Carolyn, and his family. Bob was known for his incisive intelligence, his oratorical and analytical skills, speaking up when others shied away from controversial issues, his sense of humor, and pursuing his advocacy with passion and purpose. Born in Minneapolis, MN in 1930, Bob was the youngest of seven children of labor and civic leader Rubin Latz and Rose (Arnov) Latz, first generation immigrants from Lithuania. Bob grew up in North Minneapolis, became a Golden Gloves boxer, and attended North High School. His father died during his first year at the University of MN, where Bob was President of Sigma Alpha Mu fraternity and Hillel House. While attending the U of M Law School, Bob co-authored an article comparing the nascent MN and national labor relations acts. After law school, Bob served as an Assistant Attorney General where he was at the forefront of the emerging civil rights movement, prosecuting the first charge under Minnesota’s employment discrimination law, a race discrimination case on behalf of a Black busboy who sought to be upgraded to waiter. Starting in 1958, Bob was elected to 4 terms as a State Representative from North Minneapolis. He continued to work vigorously for those less fortunate, co-authoring the MN Fair Housing Law in 1961, prohibiting housing discrimination. In 1966, Bob ran statewide and became the DFL-endorsed candidate for Attorney General. After the North Mpls. riots in 1967, Bob set out to help the community heal by working with business community leaders to form the Urban Coalition of Minneapolis, serving as chairman. He was also a founder and president of the Greater Minneapolis Metropolitan Housing Corporation. In Bob’s private law practice, he sought justice for labor union members. His practice also concentrated on personal injury and medical malpractice claims, and he represented clients in their race, sex, and other discrimination claims. Working with the EEOC, he successfully litigated a sex discrimination class action claim, resulting in the largest known discrimination settlement in MN at the time. He also successfully fought to seat the first deaf juror in MN. The state legislature elected Bob to the U of M Board of Regents in 1975, where he served as its first Jewish Vice-Chair. In 1983, the Regents appointed him to the U of M Hospital and Clinics Board of Governors, where he served as Chair in 1988-89. Bob had a lifelong commitment to help the Jewish community overcome discrimination and prejudice, serving as President of the Jewish Community Relations Council and serving for many years on the Anti-Defamation League’s National Commission. He also served in leadership roles for Temple Israel. At 77, he authored Jews in Minnesota Politics: The Inside Stories (2007). In 2012, the MN State Bar awarded him the David Graven Public Service Award for his commitment to public and community service while exemplifying the highest standards of the legal profession. Bob was preceded in death by his parents, Rubin and Rose Latz; and siblings Bertha, Leo, Dolly, Shirley, Sheba, and Jeannette. Family, justice, and fairness served as the core driving forces of his life- making the world a better place. Funeral services will be held on Sunday, April 24 at 1:30pm at Temple Israel, 2323 Fremont Ave. S., Mpls, also available on zoom, email [email protected] for the link. Shiva Sunday and Monday at Temple Israel at 7:00 p.m.

The family of Robert "Bob" Latz created this Life Tributes page to make it easy to share your memories.