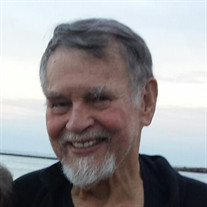 Richard "Dick" Thomas, age 86, of Minneapolis, dearly beloved husband of Sandy Gerber, loving brother of David, devoted uncle to numerous nieces and nephews, and loyal friend to many, especially those in the family of Bill W., passed away on August 8, 2019. Dick was a person of great heart, who felt the pain of people who struggled economically, having grown up as the youngest of ten children, whose father died when he was six months old, and whose family survived on public benefits. He was grateful for the government assistance his family received and the opportunities he had through the GI bill and was happy to pay taxes as partial repayment for this help. Dick was a talented writer, and worked as an advertising copywriter for Bozell, Fallon McElligott Rice, and other agencies in the Twin Cities. Dick loved great literature, especially books by William Faulkner and Nelson Algren, enjoyed playing boogie-woogie piano, singing in harmony, painting (inspired by artist, Itzchak Tarkay), and writing humorous essays, one of which was published in Harper’s magazine. Dick came late to a fondness for travel, but New York City and Minnesota’s North Shore were two of his favorite places to visit. Dick was generous to a fault to his friends and family and carried a stack of dollar bills to hand out to anyone on the street who asked. Above all, the special love and the emotional, intellectual, spiritual, and physical bond between Dick and Sandy will endure forever. Preceded in death by his parents, Addie and Doy; eight siblings; and his son, Jason Thomas. Graveside service 11:00 am, SUNDAY, August 11th, TEMPLE ISRAEL MEMORIAL PARK, 4200 3rd Ave. S., Minneapolis. Memorials preferred to Minneapolis Alano Society, 2218 First Ave. S, Minneapolis, MN 55404 or to Amnesty International. SHIVA at 4132 22nd Ave. S., Minneapolis, Sunday – Tuesday 7 pm.

Richard "Dick" Thomas, age 86, of Minneapolis, dearly beloved husband of Sandy Gerber, loving brother of David, devoted uncle to numerous nieces and nephews, and loyal friend to many, especially those in the family of Bill W., passed away on... View Obituary & Service Information

The family of Richard "Dick" Thomas created this Life Tributes page to make it easy to share your memories.