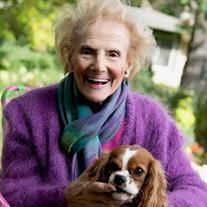 Renee Sorelle Ribnick passed away on April 29, 2022, in her home at age 93. She was born in St. Paul, MN to Etta and Samuel Jacobs. She was their sole surviving child and was preceded in death by her brothers, Stanley and Jerome. Renee earned multiple degrees at the University of Minnesota, and had a lifelong love of language and literature. It was there that she went on a blind date with Burt Ribnick, a dashing B-17 pilot who had returned from his tour of duty and had his eye on this girl from St. Paul. Once she married him and crossed the Mississippi she didn’t look back. Burt preceded Renee in death in 1993 after 42 years of marriage. Renee is survived by her five children, Bruce (Sharon), Bill (Gail), Judy (Diane), Susan, Debbie (Megan); grandchildren, Jessica (Paul), Rebecca, Steven (Chelsea), Evan (Yelena), Justin, Leslie (Slava), Lauren (Adam), Elana; and great-grandchildren, Amelia, Esme, Benjamin, Noa, Ross, Carly, Sydney, Gloria, Micah, Ethan; and loving nieces and nephews. She will also be sorely missed by her beloved dog, Linus. Renee was known for her bold, confident sense of style, her love of floor to ceiling saturated pink walls and her ability to wear cutting edge couture and make it look fabulous. She firmly believed in the "life is short, buy the shoes” school of thought. She loved to host elaborate holiday family dinners, and was an unparalleled cook and baker. Our mom believed that when eating out, meals should be ordered dessert first. Renee was a voracious reader, loved the spoken word and music, particularly classical music and Nat King Cole. Her iron clad memory and razor-sharp mind never faltered, even to the end. Her life was long, full, and replete with more grace than can be measured. Our mom could not have enjoyed life in her home without the outstanding care of her team of caregivers. They have raised the bar on what it means to care for someone with grace, humor and compassion. Our profound thanks to Pam Marcus, Eunice Appiah, Cindy Enge and Carol Correa. Renee’s life was an example of sheer grit to overcome adversity. Our mom, our friend, our anchor has left a legacy of honor, of empathy, and of the belief that one does not have to be defined by one’s past. The lives of many people have been made richer by her large presence. Funeral service Sunday, May 1, 2022 at 12:00 noon, Adath Jeshurun Congregation, 10500 Hillside Lane W, Mtka. Shiva Sunday and Monday, 7:00pm at Adath Jeshurun. All services will be live-streamed at Adathjeshurun.org/livestream. In lieu of flowers, donations can be made to Minnesota Braille and Talking Book Library, Twin Cities Public TV, and MN. Public Radio.

Renee Sorelle Ribnick passed away on April 29, 2022, in her home at age 93. She was born in St. Paul, MN to Etta and Samuel Jacobs. She was their sole surviving child and was preceded in death by her brothers, Stanley and Jerome. Renee earned... View Obituary & Service Information

The family of Renee Ribnick created this Life Tributes page to make it easy to share your memories.