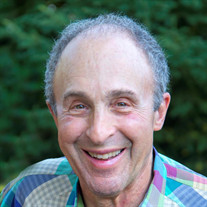 MITCHELL J. EINZIG M.D. Passed away peacefully at home surrounded by his family. He was born in 1937 in Mckeesport, PA. to Jessie and Jimmy Einzig. Mitch graduated from Washington and Jefferson College where he earned a BA in English. He graduated from Chicago Medical School and then began his residency programs at UCLA and then Chicago’s Michael Reese Hospital. While many doctors had to serve in Viet Nam, he had the coveted position of Pediatrician at the San Diego Naval Hospital as Lieutenant Commander. After a short period of private practice in Los Angeles he came to Minnesota and did a fellowship in Pediatric Gastroenterology at the University of Minnesota where he met Dr. Terry Hart .He and Terry founded the Wayzata Children's Clinic. Soon after Dr. Paul Wernick joined them. After 10 years in practice he decided to join Children's Minnesota Hospital –Minneapolis as it is now called as a Medical staff member . He ultimately became the Director of Medical Education . Mitch played a major role in transforming his hospital into the premier educational partner which it is today. As a complementary partner with the University of Minnesota, his rotation was highly sought after by both students and residents alike. The appreciation of his diligent efforts by his legions of students was demonstrated by his array of awards—beginning with the Annual Intern Teaching Award at the Naval Hospital , repeating for decades as the Faculty Teacher of the year at Children's. A plaque in his name hangs in Children's Hospital and every year the MITCH EINZIG TEACHING AWARD IS GIVEN TO A WORTHY PEDIATRICIAN. A few years ago he was awarded the Gold Cane Award which exemplifies a” True Physician .” It was stated (Henry Brooks Adams 19TH Century) “ A teacher affects eternity: he can never tell where his influence stops” Mitch was more interested in what you had to say than talking about himself. He found people so captivating, humorous and worthy of his full attention. Life was never about him but rather what he could do for you. One would find it hard to believe that even during this mysterious and difficult journey of his health decline he was appreciative of all treatments. Anyone who knew Mitch can say that their life was enriched by him. He liked all sports , at one time played basketball, watched anything on TV that had a ball. Loved golf and the guys in his Tuesday group. He was a state racquetball champion in his day. His happy place was in San Miguel de Allende and Puerto Vallarta where all the kids called him Pato (duck) for his famous duck talk. He visited many countries and cities but his favorite was Barcelona. He adored his grandkids: Jax, Hudson, Kaia and Arden. He is survived by his wife, Corrine "Corky"; daughter, Melanie and son-in-law, Robert; son, Josh and wife Randi; sister, Mimi and husband, Robert; niece, Jamie and husband Chris and baby Jordan; sister-in-law, Mary Jane and brother-in-law Steve Harris; nieces, Jennifer and Allison and husband Brian and children Sari, Lena, and Fiona and last but not least the Hartman/Mayeron clan too numerous to mention. His care at the end of life was lovingly given by Peggy, Dana, Lydia, Jaime, Spencer, Lacey, Heidi and Anne-Marie. Memorials to the Mitchell Einzig Teaching award at Children’s Hospital or to donors choice. Zoom funeral service 1:00pm SUNDAY February 14th. and Zoom Shiva 7:00pm Sunday. Email [email protected] for the zoom link for both services.

MITCHELL J. EINZIG M.D. Passed away peacefully at home surrounded by his family. He was born in 1937 in Mckeesport, PA. to Jessie and Jimmy Einzig. Mitch graduated from Washington and Jefferson College where he earned a BA in English. He... View Obituary & Service Information

The family of Mitchell J. Einzig M.D. created this Life Tributes page to make it easy to share your memories.

Passed away peacefully at home surrounded...