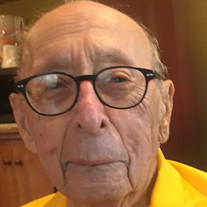 Mischa Z. “Mitch” Dworsky, passed away peacefully at home early Sunday morning surrounded by family and friends at the age of 98. Preceded in death by his parents Reva and William Dworsky, wife Doris (Finnegan) Dworsky; brothers, AY “Joe” (Marion (Fidelman) Dworsky and Peretz Dworsky; sisters, Dena Dworsky, Bella Dworsky Moore and Bess (Arnold) Stein. Mischa is survived by his sons Phillip and William (Beth) Dworsky and grandchildren, Solomon and Ari. Mischa’s life began and ended in Minneapolis, but included travel to all corners of the world. He graduated from Mpls Talmud Torah and North High School (38) and attended the University of Minnesota. Due to the time of the Great Depression and WWII, his studies ended and he and his brothers took over and operated the family business, The Dworsky Barrel Company, along with their mother and as a result of their father’s death in 1936. Mischa was stationed in Paris, France during WWII, met and married his wife of nearly 50 years Doris who was a stewardess for Northwest Airlines. Mischa and Doris adopted sons Phillip and William and raised their family in Minnetonka and added a second home in Palm Beach, Florida during retirement years. Many many dear friends were made throughout life, in business as founding members of NABADA and Chairman and CEO of Consolidated Container Corporation and through various associations such as The St Croix Yacht Club, Hudson Yacht Club, Rolling Green Country Club, The Minnesota Orchestra, Minneapolis Jewish Federation, just to name a few. Nothing was more important to Mischa than family, his wife, children, grandchildren, brothers, sisters, nieces and nephews. Special thanks to Caregivers Grace Chiluba and her husband Marvin, who took care of Mischa from the beginning of a ten year long battle with dementia, as well as David Rossman, Bob Carlson and Nelya Taylor. Special thanks to Dr. Paulo Shiroma, Dr. Ray Scallen and to the trainers at the Marsh and Mpls. J.C.C. for providing real care which allowed him to live a strong and healthy life despite the circumstances. Funeral service 1:00 p.m. THURSDAY August 23rd at TEMPLE ISRAEL MEMORIAL PARK, 4200 3rd Ave. So. Mpls. In lieu of flowers, memorials are preferred to Mischa and Doris Dworsky Outreach Fund at Temple Israel or the donor’s favorite charity. SHIVA, 6:30 p.m. – 9:30 p.m. Monday August 27th at Jax Café, 1928 University Ave. NE, Minneapolis, MN

The family of Mischa "Mitch" Dworsky created this Life Tributes page to make it easy to share your memories.