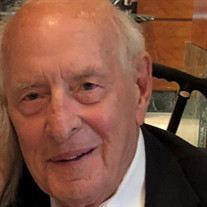 Melvin (Mel) H. Maisel of Minneapolis, Minnesota passed away October 9,2020, having reached 94 years of age. Preceded in death by his parents, Nathan and Sarah Maisel; and brother, Stan. He is survived by his loyal, wonderful, beautiful, loving wife, Renée, sharing 72 years of marriage; daughter, Adrienne (Michael) Hugo of suburban Chicago (Mundelein) Illinois; son, Andrew (Vickey Weir) Maisel of Los Altos, California. Mel adored his four grandchildren, Joshua, Maria, and Dr. Zachary Hugo, and Dr. Sabrina (Stephen Fournier) Maisel; two great- grandsons, Landon and Callum Hugo; and, last but far from least, his dear nephews, Greg (Darla) and Robert (Bella) Maisel. Mel graduated from North High School early in 1943 in order to attend the University of Minnesota for one year under an accelerated program before enlisting in the U.S. Navy in early 1944. He was honorably discharged in February 1946. While in the Navy, he was trained as a radar technician and later as one of a select group repairing damaged sonar projectiles while assigned to the USS Anthedon, a submarine force mother ship and served in the South Pacific during WWII from November of 1944 to December of 1945. He returned to the University of Minnesota and graduated in June of 1948 with a B.S. degree, majoring in accounting. He met the stringent requirements to become a Certified Public Accountant in 1952 and was in public practice with the CPA firm Figen & Figen and became a partner. In 1956 he joined Old Peoria Company, a wholesale distributor of wines and spirits as its controller, and later as its senior vice president. Mel retired in the Fall of 1989. He was active in many Jewish organizations having served on the boards of the Minneapolis Federation for Jewish Services, where he helped found its Young Men’s Council, was a board member at Temple Israel and the Talmud Torah of Minneapolis. At all times, he cared deeply for his family, Judaism, the United States of America, the State of Israel, and the less fortunate. He treated others with dignity, honesty and respect. Zoom funeral service 11:00 am on TUESDAY, October 13th. Contributions in Mel’s memory may be made to Sholom Home West Minneapolis, Minnesota or to a charitable organization of your own choosing. Zoom SHIVA 7:00 pm on Tuesday. Email [email protected] for links.

Melvin (Mel) H. Maisel of Minneapolis, Minnesota passed away October 9,2020, having reached 94 years of age. Preceded in death by his parents, Nathan and Sarah Maisel; and brother, Stan. He is survived by his loyal, wonderful, beautiful, loving... View Obituary & Service Information

The family of Melvin Hyman Maisel created this Life Tributes page to make it easy to share your memories.