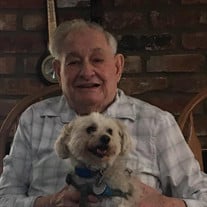 Marvin Donald Wolf, who was on born May 1, 1929 and died on March 25, 2020, loved life and lived it with humor, compassion, determination, an incredible interest in other people and the world around him, and unbounded positivity. After serving in the Air Force, he became active in the Jewish War Veterans organization, serving in various leadership roles. For many years, he was in charge of arranging the program and placing flags on every Jewish serviceman’s grave for Memorial Services at the Temple of Aaron and Fort Snelling. He was a Boy Scout leader and member of the Osman Shrine, where he willingly donated his time to helping others. In his 80s, he was still downhill skiing, golfing, and winning dance contests on international cruises. Marvin had a long history at the Temple of Aaron in St. Paul, and in his later years, ensured attendance was good at its Community Passover Seder, by purchasing beef brisket for everyone who attended. Marvin was selected to be a member of the St. Paul Winter Carnival Senior Royalty, where he continued making people smile with his kind gestures and outgoing personality. His love of classic cars led him to become a member of a classic car club, riding in parades, and polishing his 1962 Chevrolet Impala Convertible and his other classic cars until they sparkled in the sun. However, the true sparkle in Marvin’s life was his wife Gloria, who predeceased him. They are now together. Marvin was also predeceased by his beloved parents, Sarah and Louis Wolf, and his dog, Big Boy, and was survived by, among others, his sister Shirley Breitman, his nephews Bruce and Richard Breitman , niece Laurie Sue Jarrow, and his sister-in-law Rhoda Klevatt. He was also survived by many who were very special to him and who thought the same way about him. Those included friends from his various organizations, and special friend Lois Udell, Sue and Michael Judes and their children, Rebecca and Debbie, Jeff and Jodie Udell and their children Tyler and Mikaela, Richard Hugley, Barry Kelner and Nancy Bender-Kelner and their children, Marshall, Malcolm, Sage, and Jackson, Rebecca Bender and her son Lincoln (who referred to Marvin as “The Legend”), and Marvin’s beloved dog Buddy. Much gratitude is owed to Quality Care Companions, specifically Jumoke Olawaogin (“J”), other devoted caregivers, and its owner Krishna Sharma, who helped Marvin fulfill his desire to stay in his home. It seemed Marvin would live forever. Through his good deeds, jokes, advice, and fundamental goodness, he will. Donations in Marvin’s memory may be made to Last Hope (dog and cat rescue) at P.O. Box 114, Farmington, MN 55024 or the Donor’s choice. Unfortunately, due to the coronavirus and the Governor’s Emergency Executive Order, the service is restricted to clergy only. Cantor Mitchell Kowitz will be officiating, per Marvin's request. The service will be live streamed at 10:00 a.m. March 30th on HODROFF-EPSTEIN'S FACEBOOK PAGE. A celebration of Marvin’s life will take place at a later date.

Marvin Donald Wolf, who was on born May 1, 1929 and died on March 25, 2020, loved life and lived it with humor, compassion, determination, an incredible interest in other people and the world around him, and unbounded positivity. After serving... View Obituary & Service Information

The family of Marvin D. Wolf created this Life Tributes page to make it easy to share your memories.