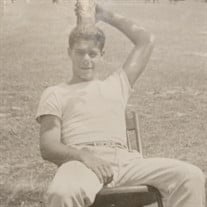 On August 16, 2019, Dr. Marvin "Bucky" Bernard Bacaner, loving husband and father, scientist and hero, passed away at the age of 96. It was one week before his 71st wedding anniversary with his beloved wife, Hadassah. He counted it from the day they met. Bucky was born on March 18, 1923 in Chicago, IL as the only child of Jacob and Minnie Bacaner. He left behind 4 children, 10 grandchildren, and 4 great-grandchildren. He volunteered for service at the beginning of World War II and served as an officer in the U.S. Maritime Service Merchant Marines throughout the war, eventually obtaining the rank of Lieutenant Commander and position as Chief Engineer. When his ship was torpedoed and sunk, he survived for 14 days on a life raft in the Indian Ocean. However, he would not be intimidated, and he continued to go to sea after the war. His lifelong passion for Israel caused him to volunteer for the Aliyah Bet, secretly bringing Jewish refugees from Europe to the soon-to-be-declared state of Israel through the British blockade. After the war, he pursued a medical degree at Boston University and a career of research at the University of Minnesota where he served as a professor in the Department of Physiology. He made many contributions to the medical literature on heart disease. Most notably, he developed the drug Brytellium which was a first line treatment for ventricular fibrillation in the 1980s and saved many lives, including U.S. President Dwight Eisenhower and the alien from E.T. He was enthusiastic and passionate about his interests. Some of his many interests, which live on in his children and grandchildren are boxing, sailing, skiing, tennis, basketball, wind-surfing, cooking, healthy living, and gardening. He was also an accomplished clarinet player. He was known for his indomitable spirit, strong views, vibrant personality, independent thinking, unconventional ways, and commitment to his Jewish heritage and the State of Israel. He was preceded in death by his father, Jacob, and his mother, Minnie. He is survived by his wife Hadassah , his four children, Vivien, Nina, Daniel, and Toby, his grandchildren, Nathaniel, Ariel, Lily, Tali, Sophie, Jacob, Rachel, Samuel, Seth, and Tate, and great-grandchildren Serena, Henry, Benjamin, and Judah. Graveside service will be held 12PM SUNDAY, Sept 18th at the MINNEAPOLIS JEWISH CEMETERY, 7032 Penn Ave S., Richfield. In lieu of flowers, donations may be sent to The Jewish National Fund or Friends of the Hebrew University. SHIVA will be from Sunday through Friday at Vivien Bacaner & David Bahn’s home; morning (Shacharit) services at 6:30 AM with Shiva hours until 9:00 AM. Shiva hours from 7PM- 9PM with afternoon/ evening (Mincha Maariv) services at 7:55PM also, Shiva services at the home of Mrs. Hadassah Bacaner will be from 4PM- 6:30PM through Friday. Minyanim: 2 minyans for Mincha/Maariv on Sunday August 18th at 7:55 PM: One at Kenesseth Israel (regular) One at the home of Vivien Bacaner and David Bahn (5024 w 29 st. St. Louis Park) - for family & friends From Monday August 19th to Friday August 23rd ALL minyans at Kenesseth Israel (6:30 AM & 7:55 PM)

On August 16, 2019, Dr. Marvin "Bucky" Bernard Bacaner, loving husband and father, scientist and hero, passed away at the age of 96. It was one week before his 71st wedding anniversary with his beloved wife, Hadassah. He counted it from the... View Obituary & Service Information

The family of Marvin Bacaner created this Life Tributes page to make it easy to share your memories.