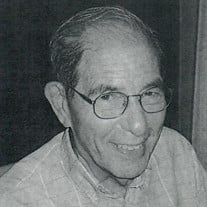 Dr. Marty passed away peacefully on August 25, 2019 at age 98. Preceded in death by his incredible, trailblazing wife, former State Representative, Gloria Segal; his loving son, Thomas; and his parents, Clara and Harry Segal. Survived by his children, Dr. Nolan (Robin), Susan (Myron Frans) and Rob (Susan); grandchildren, Jonathan (Brandy), Mara (Jeffrey), Nathan, Isaac, Ruby and Leo and great-granddaughter, Isabelle; and his special friend, Ethel “Eddy” Cohen. Dr. Marty founded and ran the pathology lab at Methodist Hospital for over 30 years, joined by his younger brother, Dr. Edward Segal, and many other talented pathologists and technicians. He was a doctor’s doctor, dedicated to achieving the highest quality standards, with the “Segal brothers” lab being the first in the City to achieve national accreditation. He loved teaching and relished taking time to explain and answer questions. He diagnosed the first and only confirmed human case in the United States of an animal parasite in larval stage, saving the patient’s life, and prompting a visit by the Centers for Disease Control who confirmed the diagnosis. Marty was also an accomplished clarinetist. He worked his way through school by playing in bands, including a summer with the Six Fat Dutchmen of New Ulm. He continued to perform with multiple groups through his 96th year. Most of all, Marty was a supportive, loving and generous husband, father, grandfather, uncle, teacher and friend. He will be greatly missed. A Memorial Service will be held at 3:00 pm, SUNDAY, September 8th, at TEMPLE ISRAEL, 2323 Fremont Ave S, Minneapolis. In lieu of flowers, memorials preferred to the Martin & Gloria Segal Fund for Services to Adults with Chronic Mental Illness at JFCS-Minneapolis. SHIVA at Temple Israel, Monday, September 9th at 7:00 pm.

Dr. Marty passed away peacefully on August 25, 2019 at age 98. Preceded in death by his incredible, trailblazing wife, former State Representative, Gloria Segal; his loving son, Thomas; and his parents, Clara and Harry Segal. Survived by his... View Obituary & Service Information

The family of Dr. Martin A. Segal created this Life Tributes page to make it easy to share your memories.