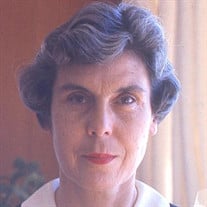 Margaret Anne Bateman Thomas was born in Duluth to Lewis and Nancy Bateman on February 7, 1923. She graduated from Central High School, Duluth Junior College, and the College of St. Scholastica. Then she worked as a medical technologist and ran the lab at Hibbing General Hospital. On March 30, 1946, she married Dr. John Verran Thomas. They traveled to Albany, New York, where he served his internship, and later lived in Japan while he was a flight surgeon with the U.S. Fifth Air Force during the Allied occupation. Upon returning to the States in 1949, they lived in Minneapolis for the duration of her husband’s surgical residency. In 1954 they made Duluth their permanent home. With their five children they had a great time going on canoe trips and skiing trips, staying at their cabin, and touring the country. Margaret enjoyed being active in the Northern Pine Girl Scout Council, the Invest-Hers Club, the Friday Club, Chapter BY of P.E.O., and the Lake Superior Medical Society Alliance. She was a lifelong member of Lester Park United Methodist Church, served in its Naomi Circle, and assisted a church-sponsored Hmong refugee family in making a home in Duluth. After her children had grown up, Margaret earned an M.S. in microbiology from UMD and through her thesis research made a contribution to the study of genetic changes in fish caused by acid rain. She also volunteered her time as a math tutor at the Federal Prison Camp in Hermantown. Later in life she wrote DJC Remembered, a history of the Duluth Junior College, which was published in 2013. Margaret also loved gardening, reading, and especially spending time with her children and grandchildren. Margaret was preceded in death by her parents, by her husband John, and by her older brothers, Robert, Henry, Walter, and Richard. She is survived by her children Will (Cynthia) Thomas, Charles Thomas, and Paul (Mara) Thomas of Minneapolis; Mary (Mike) Henle of Williamsburg, VA; and Jane (Ed) Gracza of Roseau, MN; grandchildren Dylan (Nicky) Thomas and Claire Thomas; James Henle; Philip Gracza, Rose (Cody) Carlson, and Gabe Gracza; Virginia, Alden, and Harrison Thomas; and great-grandchildren River and Lola Thomas. The funeral service will take place at Hope United Methodist Church, 301 West St. Marie Street, Duluth, on Saturday, October 23, at 2:00 pm with visitation at 1:00 pm. Masks are required. Those unable to attend services in person are welcome to view the service on YouTube, www.youtube.com/hopeumcduluth. Burial at Forest Hill Cemetery will follow the service. Memorials to Hope United Methodist Church or to Churches United in Ministry (CHUM) in Duluth would be deeply appreciated.

Margaret Anne Bateman Thomas was born in Duluth to Lewis and Nancy Bateman on February 7, 1923. She graduated from Central High School, Duluth Junior College, and the College of St. Scholastica. Then she worked as a medical technologist and... View Obituary & Service Information

The family of Margaret Anne Thomas created this Life Tributes page to make it easy to share your memories.

Margaret Anne Bateman Thomas was born in Duluth to Lewis and...