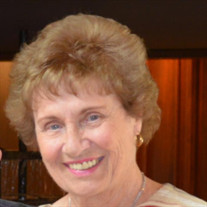 LOUISE R.“Lou” ROTMAN, of Plymouth MN, passed away on May 6, 2020, at age 86. She is survived by her husband Jerry, their children L.J. Rotman (Elizabeth Hudson) of Golden Valley, and daughter, Carly, of Chicago, Dr. Mark Rotman (Cathy) of Ft. Collins CO, and their children, Andrew and Grant of Denver CO, and Laura Folven (Jim) and their children, Griffin and Grace, of Plymouth. She was preceded in death by her parents, Harriet and Harvey Metcalf and daughter in-law, Jill Rotman. Lou was born and raised in Sioux City, Iowa on September 11, 1933. In 1951 she entered the University of Iowa. While there, she met the love of her life, Jerry, who was visiting from college. Eventually Jerry joined the Marines and Lou went to visit him at his base in California. To the surprise of many friends, they decided to elope to Las Vegas to begin a marriage that lasted 65 wonderful years. Lou returned to Iowa to finish her teaching degree while Jerry was deployed to Korea. When Jerry returned from overseas they moved to Connecticut and Massachusetts where Jerry finished at Yale and got his law degree at Harvard. Then the two of them decided they wanted to return to the Midwest and settled in Minneapolis. Lou enjoyed being a substitute teacher in the St. Louis Park School District where she taught junior and senior high for over 30 years. She developed many strong relationships with both staff and students. Upon her retirement, Jerry started a scholarship fund in her honor at St Louis Park High School for graduating seniors, which continues to this day. Lou and Jerry took great pleasure selecting recipients of the annual scholarship and tracking their success. Lou was always an active volunteer within her community. Her hospitality was a magnet for all. She was a huge sports enthusiast. Her favorite teams were Gopher Men’s Basketball, the Minnesota Vikings and the many sports teams her children and grandchildren participated in. Lou enjoyed world-wide travel with Jerry and close friends. They went on many memorable family vacations, including the annual 4th of July trips to Grandview Lodge. Anyone who encountered Louise was met with her everlasting, beautiful smile, and was Jerry’s “sunshine”. As Jerry has said, the best thing that ever happened to him was meeting the ever-smiling “Miss Sioux City Lou”! Donations can be made to the St Louis Park Dollars for Scholars: Louise Rotman Scholarship Fund or to The Alzheimers Association. A private family service was held.

The family of Louise R. Rotman created this Life Tributes page to make it easy to share your memories.