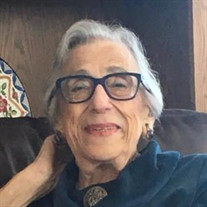 Lois K. Gibson age 92, of Minneapolis, passed away quietly at her residence due to complications from cancer. Born in Hudson, NY, she received her B.A.in journalism from The Ohio State University before moving to New York City with her husband, Larry. In 1966, she, Larry, and their children relocated to Minneapolis, where she became active in the local arts scene, DFL politics, women’s rights, and Jewish organizations, particularly at Temple Israel. A champion of the arts, Lois served on the boards of the Minnesota Opera, the Goldstein Gallery, the Metro Council Arts Commission, and Theatre de la Jeune Lune. In the political arena, Lois ran for Minneapolis City Council, and for the DFL endorsement for the 5th Congressional District. She served on the DFL State Central Committee and 5th District Central Committee, and was chosen as a delegate and alternate to both Minnesota and National Democratic Conventions. She served on CLIC (Capital Long Range Improvement Commission) for Minneapolis. Deeply committed to her faith, Lois served as President of the Midwest Federation of Temple Sisterhoods and as a National Board Member of WRJ (Women of Reform Judaism). She also served as an officer and board member of the Temple Israel Sisterhood, and the National Council of Jewish Women. In 2012, she and Larry received the distinguished award for Outstanding Community Service and Service to Temple Israel. In her 80s, Lois turned to writing, publishing two mystery novels. Her ultimate goal was, “To leave this world a better place for my having been here.” Her legacy lives on through her extended family and the countless people whose lives she touched with her commitment to activism and boldness of spirit. Lois is preceded in death by her husband of 68 years, Lawrence D. Gibson and survived by her sister, Jeannette Moller (Bill); Children: Stuart (Adrienne), Richard (Cheryl), James (Barbara), Mark (Kirstin), and Jessica Cook (John); Grandchildren: Elyse Ash (Brad), Rebecca, Micah (Catherine), Avi, David, Sam, and Paula, and great grandchildren, Noa, Abby, and Liora. Funeral services 11:00 AM, Thursday, April 18, at TEMPLE ISRAEL, 2323 Fremont Ave. So., Minneapolis. In lieu of flowers, memorials to "The Gibson Family Reform Education Fund” at Temple Israel. Shiva at 7:00 pm, Thurs. at Temple Israel.

Lois K. Gibson age 92, of Minneapolis, passed away quietly at her residence due to complications from cancer. Born in Hudson, NY, she received her B.A.in journalism from The Ohio State University before moving to New York City with her husband,... View Obituary & Service Information

The family of Lois Kestenbaum Gibson created this Life Tributes page to make it easy to share your memories.

Lois K. Gibson age 92, of Minneapolis, passed away quietly at...