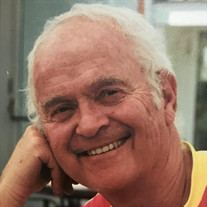 Leonard H. Levitan, MD of Minneapolis, 88, passed away on November 4, 2020 after a struggle with Alzheimer&#8217;s Disease and then Covid-19. He lived a long, joyful, energetic and productive life, full of fun experiences and caring for others. Len... View Obituary & Service Information

The family of Leonard Herbert Levitan MD created this Life Tributes page to make it easy to share your memories.

Leonard H. Levitan, MD of Minneapolis, 88, passed away on November...