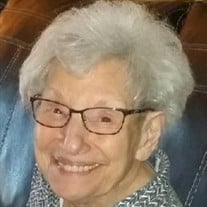 Lee (Silesky) Sperling, 97, of Roseville, passed away peacefully at home on November 1, 2020. She was preceded in death by her first husband, Sidney “Buddy” Silesky; second husband, Irving Sperling; and grandchildren, Jesse Silesky and Laurie Dolan. Survived by her children, Barry (Sharon Solwitz) Silesky, Barbara (Chuck) Tidd, Larry (Nancy) Sperling, Barbara Ritzen, Cheri (Lee) Heidel; her brother, Allan (Debby) Schneider; and grandchildren, Chip (Sarah) Tidd, Seth (Melissa) Silesky, Adam Sperling, Hayley Sperling, Robert (Kim) Silver, Sheli (Cory) Ginsburg, Joseph (Sara) Dolan. Lee Sperling had a wide, infectious smile and a clear sense of her direction. Born in Superior, Wisconsin, she was excited to go to the University of Minnesota in Minneapolis where she earned her Bachelor’s Degree in Business Administration in 1946, one of very few women in her class. Following WWII, she married Buddy Silesky, had two children, and worked occasionally before going back to work fulltime after his death in 1964. In 1969, she and Irving Sperling were married; they enjoyed international travel together for many years until he passed away in 1988. Still wanting to explore, she continued to take cruises with a girlfriend. She was Executive Secretary with Chubb & Son, Inc. for over 20 years until she retired in 1985. Her Jewish faith was important to her throughout her life. She was active in the Temple Israel Sisterhood and the League of Women Voters. An avid bridge player, she was part of three ladies’ groups in her later years, and in her spare time she would walk two miles around the Har Mar Mall. When asked about worries or fears about her health, she said, “It doesn’t do any good to worry about it; it’s not going to change anything.” Looking back on her life in her final year, Lee would describe herself as lucky. She had two wonderful husbands and close relationships with both of their families. She is thankful for her children and their spouses and the special relationships she had with her grandchildren. Special mention to her loving caregiver and friend, Karen Atkins. Funeral service 3:00 pm THURSDAY, November 5, 2020, via Zoom, for link email [email protected] In lieu of flowers, memorials may be sent to Temple Israel, 2323 Fremont Ave. S., Minneapolis, MN 55405, or the Multiple Sclerosis Association of America, Donor Relations Center, PO Box 96219, Washington DC 20090-6219. SHIVA, Thursday, November 5th, 7:00 pm via the same Zoom link as for the funeral.

The family of Lee (Silesky) Sperling created this Life Tributes page to make it easy to share your memories.