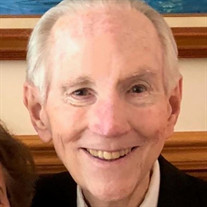 Lee Bearmon died on March 14, 2021 at age 88. Lee was preceded in death by his parents, Bertha and Aaron; brother Samuel, and sister Norma Karpeles. Lee is survived by his loving and devoted wife and best friend of 59 years, Barbara D. Bearmon; children Amy Bearmon (Olivier BenHaim); Paula Sieger (Michael) and Sara Mostofsky; grandchildren, Amalya and Lior Benhaim; Jacob (Amanda) Sieger, Benjamin and Jennifer Sieger; Gillian, Harrison, and Justin Mostofsky. Lee was born in Minneapolis, Minnesota. He received his BBA with high distinction from what is now the Carlson School of Management at the University of Minnesota. He received his law degree with honors from the University of Minnesota Law School and was recognized as a Distinguished Alumnus by the school in 1999. Lee was designated as a “Super Lawyer” in 2000 by Minnesota Law and Politics, Mpls-St. Paul Magazine and Twin Cities Business Monthly. Upon graduation from law school, Lee served three years as a First Lieutenant and Captain in the Judge Advocate General’s Department of the United States Air Force. From 1960-1979, Lee was an attorney and then partner in the law firm of Levitt, Palmer, Bowen, Bearmon and Rotman, which merged with Briggs and Morgan in 1983. In 1979, Lee joined Carlson Companies, Inc. where he became Senior Vice President, General Counsel and Secretary. He was also responsible for security and served on several Boards of Directors of affiliated companies as well as the Carlson Companies’ investment, audit, benefits and retirement committees. He was a mediator and arbitrator on the Minnesota Supreme Court roster. During his career, he was a member of numerous professional organizations including the American Corporate Counsel Association and the American, Minnesota, and Hennepin County Bar Associations. After retiring from Carlson Companies, Lee served five years as Of Counsel at Briggs and Morgan. He also was a pro bono mediator, facilitating the resolution of disputes among individuals. He served on several non-profit Boards of Directors including the Jewish Community Center, Sholom Foundation, Talmud Torah Foundation and Beth El Synagogue. Lee had a wonderful attitude and sense of humor. When circumstances were too good or too bad, his favorite expression was, “this too will pass.” For many years, Lee and Barbara enjoyed volunteering in the Literacy Program in the Wayzata Elementary School District. Lee and Barbara also enjoyed tennis, bridge, reading, travel, long walks, classical music, and they participated in a variety of educational classes and lectures. Lee and Barbara believed in the importance of education and ethical conduct and established a fund for the teaching of Pirke Avot (Ethics of our Fathers) at the Minneapolis Talmud Torah as well as Funds at the Sholom Foundation, Beth El Synagogue and Jewish Family and Children Services. Consistent with his commitment to ethical concerns, he established the Lee Bearmon Award in Legal Ethics and Professional Responsibility Fund at the University of Minnesota Law School. In lieu of flowers, contributions preferred to any of the above established funds. Zoom funeral service TUESDAY, March 16, 2021 at 1:00pm. Shiva Tuesday and Wednesday, 7:00pm. Email [email protected] for the link.

Lee Bearmon died on March 14, 2021 at age 88. Lee was preceded in death by his parents, Bertha and Aaron; brother Samuel, and sister Norma Karpeles. Lee is survived by his loving and devoted wife and best friend of 59 years, Barbara D. Bearmon;... View Obituary & Service Information

The family of Lee Bearmon created this Life Tributes page to make it easy to share your memories.