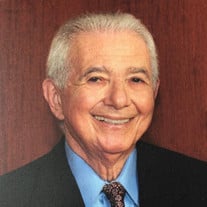 Dr. Kenneth Fred Swaiman of Minneapolis and Tucson, passed away peacefully on 9.18.2020 at age 88 due to natural causes. Preceded in death by parents Shirley (Ryan) and Lester Swaiman and sister Lois “Honey Girl” (Swaiman) Schochet. He is survived by his wife Dr. Phyllis Kammerman Sher, sister Sybil (Swaiman) Klobucar, and children Lisa Swaiman (Jim Grossman), Jerrold Swaiman, Barbara Swaiman (Mark Franklin) and Dana (Bruce) Hoberman. Grandchildren Sarah Grossman; Isaac (Courtney), Ethan and Danielle Swaiman; Sawyer (fiancé Jeffrey Brown) and Ryan Franklin; and Jordan and Benjamin Hoberman. Great-grandchild Everett Swaiman. Dr. Swaiman was a pioneer in the field of pediatric neurology, impacting children with disabilities and diseases of the brain around the world. With roots on Mpls’ North Side, ‘Kenny’, as he was better known back then, was often found at his Dad’s Plymouth Avenue barbershop. He attended the University of Minnesota for college, medical school and training programs in pediatrics, neurology and pediatric neurology. For decades, Ken headed the Division of Child Neurology at the U of M, was a full professor of pediatrics and neurology, and ran a research lab. He created and edited the field’s first journal “Pediatric Neurology” and major textbook, now titled "Swaiman's Pediatric Neurology: Principles and Practice". He served as a consultant to the NIH and started several Mpls-based professional societies -- most notably, the Child Neurology Society with more than 2,000 members in 22 countries. Above all else, patients came first. He treated children at the U of M clinic whose diseases were confounding to others. Doctors worldwide came to rely on him to assist patients with brain disease and associated disabilities. Ken optimistically cheered his Vikings and Twins until the end. He enjoyed travel, tennis, short-story writing, “binging” on the news and the arts. Drs. Swaiman and Sher donated the "X" sculpture at the entrance of the Walker Art Museum in honor of their parents. Private graveside service. Family and friends welcome at a Zoom Shiva on 9.21.20 7:-8:00 PM CT. Join Zoom Meeting https://us02web.zoom.us/j/88905950228?pwd=TmpLaUw0QmM0c2JHWkgzN0VtSXpYZz09 Meeting ID: 889 0595 0228 Passcode: 939929 Donations may be made to the Child Neurology Foundation at 201 Chicago Ave S, Mpls., MN 55415 or childneurologyfoundation.org

The family of Dr. Kenneth Fred Swaiman created this Life Tributes page to make it easy to share your memories.

Dr. Kenneth Fred Swaiman of Minneapolis and Tucson, passed away...