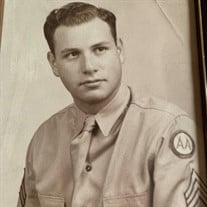 Justin Swiller, age 97, of St. Louis Park, passed away September 25, 2020. Preceded in death by wife, Natalie Joy; parents, Esther and Maurice Swiller; sister Lois Rose. Survived by children Cathy (Ken) Liebman and Bobby (Missy) Swiller; grandchildren, Dan, Emily and Jeremy Liebman, and Isaly and Brooke Swiller; sister Suzanne Weil of Manhattan. Justin was born on Upton Avenue North and attended North High School. Following high school, Justin served in WWII in the Pacific Theater as a Lieutenant in the US Army Anti-Aircraft Artillery. Justin was awarded the Bronze Star. When he returned from war, he graduated from the University of Minnesota. Justin was a buyer at Dayton’s and then went on to own and operate a chain of stores known as Now and Then. Among Justin’s favorite things were golf and socializing at Oak Ridge Country Club, and then, after retirement, cruising around the world with his beloved wife. Justin loved telling stories and had an anecdote for every occasion. He was a lifelong member of Temple Israel where he enjoyed many milestone events. Throughout his life, Justin was a highly enthusiastic fan of the Minnesota Golden Gophers, Twins, and Vikings. Every year in earnest, he waited with eternal hope for the Gophers to win the national football championship. Perhaps the most joy Justin received was from his grandchildren. He loved beyond measure visiting with them; his first question of the day was always, “How are the kids?” The family would like to thank Cantor Abelson, Stephanie, and Julie for their support and visits over these past few years. Funeral service 11:00 am, TUESDAY, September 29, 2020, for Zoom, email [email protected] Memorials preferred to donor’s favorite charity.

The family of Justin Swiller created this Life Tributes page to make it easy to share your memories.