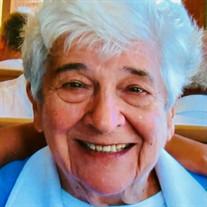 Joyce Levenson (Ribnick) age 96, lover of friends, family, bridge, maj and canasta, the sun shining on her face, current event and book discussions, died on April 19, 2021. To her family and friends, she was a role model for how to live one’s life, genuinely appreciating every moment, every person she encountered and every opportunity to learn something new. Joyce was born and raised in North Minneapolis. She attended North High School, class of ’43. In college, she was fixed up with her future husband, Sherman. She adored him so much that when he attended dental school, she called every morning and woke him up so he didn’t miss class. Joyce attended University of Minnesota for two years, followed by business school. After they married in 1946, they moved to Duluth, and lucky for Sherman, she managed his dental practice books, and their finances up until a month ago. She moved back to Minneapolis into Knollwood Place after Sherman died. She was ecstatic to be reunited with her classmates from North High and fellow Duluthians, and thought it like a college dorm. She especially enjoyed her volunteer job giving tours to new residents, which she did for many years. Joyce did not like to start her day too early, but she awoke with a smile every day, ready to be a positive, happy and energetic person. She wanted to know everything about you, and made everybody in her life feel special. She wanted to be the reason someone smiled each day, and inspired others to do the same. She was preceded in death by husband, Sherman Levenson, DDS, son, Jeffrey Levenson, parents, Hy and Marian Ribnick, in-laws Sam and Lena Levenson, and brother and sister-in-law, Arnold Ribnick (Jan), nephew, Greg Segal, brothers-in-law and sisters-in-law, Selma Segal (Nate) and Beti Kreiman (Melvin). Joyce was a wonderful mom and grandmother. She is survived by her children: Nancy Gordon (Steve), Wendy Simenson (Steve), daughter-in-law, Jane Levenson, and grandchildren: Jonah Levenson (Christie), Jasha Levenson (Amelia), Lindsey Rose (Jason), Jenna Budda (Jeremy), Jorel Levenson, Forrest Simenson (Karolina), Sam Gordon, Ariana and Alice, and 16 great grandchildren: Taviah, Sophie, Cheyenne, Shaniqua, Ari, Peyton, Spencer, Dylan, Jeffrey, Ruby, Marcus, Ryan, Robert, Johannes, Elliot and Eliana. She was also survived by special family friend, Jack Shapiro. Family meant everything to her. Other surviving family includes Randie Segal (Jon Williams), Kai Williams, Gabe Williams (Paige), Jennifer Kreiman (Jon Kachelmacher), Leah, Kari, and Tom Kachelmacher, Jamie Kreiman, Sam Gavzy, Michael Kreiman (Katie Liu), Brian Ribnick, Daniel, Marley and Lainie Ribnick, Robert (Sue) Mathew and Ben Ribnick, Sam Popkin, Susan Shirk, Barry Popkin, Merle Wexler (Bernie). Prior to his death, special friend Manny Katz brought much joy to her life, and his family continued to be an important part of her loving circle. Over the last few years, Joyce’s close friend and duplicate bridge partner, Louis Tessler, helped her keep up her lifelong hobby, even teaching her to play online during the pandemic, and Judi Gallop helped her get to appointments and they shared tasty lunches together. Thank you to caregivers Lacey, Angela and hospice for providing loving care. Private family burial to be held Friday in Duluth. Virtual memorial service open to friends and family on Sunday, April 25, 3:00 p.m. CST. Virtual shiva to be held Monday, April 26, 7:00 p.m. CST. Please email [email protected] for the zoom link. In lieu of flowers, memorials preferred to JFCS Minneapolis, especially to Jacob Garber Transportation Services and the Annual Conference on Mental Health, Temple Israel in Duluth, Knollwood Place and the Herzl Camp Jeffrey Levenson and Gregory Segal Family Scholarship Fund.

Joyce Levenson (Ribnick) age 96, lover of friends, family, bridge, maj and canasta, the sun shining on her face, current event and book discussions, died on April 19, 2021. To her family and friends, she was a role model for how to live one&#8217;s... View Obituary & Service Information

The family of Joyce Levenson created this Life Tributes page to make it easy to share your memories.