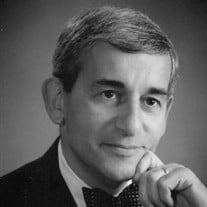 JERRY F ROTMAN, of Minneapolis, MN, passed away on December 22, 2020, at age 87. He is survived by his children L.J. Rotman (Elizabeth Hudson) of Minneapolis, and daughter, Carly, of Chicago, Dr. Mark Rotman (Cathy) of Ft. Collins CO, and their children, Andrew and Grant of Denver CO, and Laura Folven (Jim) and their children, Griffin and Grace, of Plymouth. He was preceded in death by his wife and love of his life, Louise, parents, Louis and Freda Rotman, sisters, Rosemary Brooks (Saul) and Betty Weisberg (Art), and daughter in-law, Jill Rotman. Jerry pursued life with tireless passion and took nothing for granted. He enjoyed the beauty of nature, as he found in his daily walks and Colorado ski trips. He appreciated the mastery of performances at Orchestra Hall, the plays at the Guthrie, and frequented the exhibits at the Minneapolis Institute of Arts. As a sports enthusiast he was a loyal fan to the Twins, Vikings and Gopher basketball team. Many recognized Jerry as a fixture at The Minneapolis Club, where he swam every day, and Golden Valley Country Club, which he referred to as his “summer camp” and where he played tennis and golf every opportunity he could. As a lifelong learner, Jerry was actively involved in the leadership of the University of St. Thomas Selim Center for Lifelong Learning. The consummate world traveler, Jerry traveled to nearly every corner of the world and always with Louise at his side (except for an occasional solo trip, such as to India at age 72). Jerry left nothing to chance and always had a plan. With great deliberation he carefully thought through everything he did, whether it was in his role as a trusted legal adviser to his clients, or in guiding his children, grandchildren, nieces, nephews, and others whom he mentored. Jerry was a strong believer in community service. He was active in the leadership of a number of community organizations, ranging from the Fund for The Legal Aid Society to the St. Louis Park Human Rights Commission to B’Nai Emet Synagogue. Jerry was deeply patriotic and a proud veteran who served in the Korean War. He had a great respect for his fellow veterans. Upon his return from Korea, Jerry completed his studies at Yale University and enrolled at Harvard Law School. Following graduation, Jerry and Louise moved from Cambridge to Minneapolis where Jerry joined the law practice of Levitt, Palmer, Bowen and Bearmon. Jerry, Matt Levitt, who was Jerry’s mentor, and their law partners worked successfully together for years,before merging with Briggs & Morgan establishing its Minneapolis office. Jerry retired from that firm at the age of 55 to devote his remaining years to public service (and golf and tennis). As Jerry so often acknowledged, perhaps his greatest fortune was meeting his wife, Louise, a fellow Iowan. Not long after they met while Louise was attending the University of Iowa, they eloped to Las Vegas to begin their marriage that lasted 65 wonderful years. They were the perfect complement to each other. Louise supported Jerry as he went off to war, attended college and law school and pursued his successful legal career. Together, they raised a wonderful family and made lasting relationships and contributions to their community. Jerry and Louise will be deeply missed. Donations can be made to the Mid-Minnesota Legal Aid or St Louis Park Dollars for Scholars: Louise Rotman Scholarship Fund. A funeral service was held.

JERRY F ROTMAN, of Minneapolis, MN, passed away on December 22, 2020, at age 87. He is survived by his children L.J. Rotman (Elizabeth Hudson) of Minneapolis, and daughter, Carly, of Chicago, Dr. Mark Rotman (Cathy) of Ft. Collins CO, and their... View Obituary & Service Information

The family of Jerry F. Rotman created this Life Tributes page to make it easy to share your memories.

JERRY F ROTMAN, of Minneapolis, MN, passed away on December 22,...