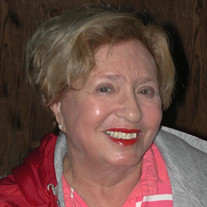 Jean Ellis Minter, age 93, of Boca Raton, FL, formerly of Minneapolis, passed away April 18, 2021. She was preceded in death by her loving husband of 47 years, Irwin "Bud" Minter; parents, Emanuel “Jacob Henry” and Hattie Ellis; and aunts, Tessie, and Helen Osterman. She is survived by her daughter, Jo Ann (Glen) Newton and sons, David Ellis Minter, and Charles Philip (Supavadee) Minter; and grandchildren, Mara Irene Jacob, Caryn Amelia Jacob, Helen Janet (Matt Stanke) Kerr, David Allen Minter, and Heather Ann (Steven Newell) Minter. Jean was born in Minneapolis, MN, on August 16, 1927. After graduating from West High School, she attended the University of Minnesota for two years. She devoted her life to her husband, children, and grandchildren. Known for her intelligence, keen sense of humor and wit, she was an avid crossword puzzle solver throughout her life. She enjoyed playing canasta with her friends as many as three times a week. An enthusiastic league bowler in her middle years, Jean remained active in athletics her entire life. She was a champion golfer, earning multiple trophies in both Florida and Minneapolis, her last championship at age 79. She loved tennis and challenged younger tennis players when opponents her own age could not keep up with her. Jean was also an avid patron of the arts with a love of theater and music. She continued to support and attend live performances throughout her life. Her family holiday dinners were always memorable, especially her matzah ball soup. Beloved wife, mother, grandmother, and friend, we will miss you forever. A private family funeral will be held. Memorials preferred to the American Lung Association.

The family of Jean Ellis Minter created this Life Tributes page to make it easy to share your memories.