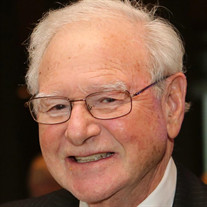 Dr. Irving Shapiro, devoted husband, loving father, distinguished ophthalmologist, and the founding medical director of the Phillips Eye Institute, died Dec. 31 peacefully in his home. He was 91 years old and was predeceased earlier in 2019 by his wife of 64 years, Janet. While much of his life was defined by his professional excellence and dedication to his patients, it was the final chapter that revealed the full measure of his compassion. Irving devoted the last years of Janet’s life to caring for her in their home. Irving’s death marks the end of several eras. He was the last surviving child of his parents, Benjamin and Rebecca Shapiro of London, Ontario. Irving was the youngest of seven siblings—predeceased by Maurie, Trude, Maude, Hyman, Sidney, and Ethel. He and Janet also were the last surviving members of the generation that established the Madeline Island meadow community, having been predeceased by Dr. John and Patty Streitz and William and Mary Ellen Bleifuss. Irving Shapiro was born on July 23, 1928, in London, Ontario. His father, who immigrated to Canada from Poland as a young boy, was a furrier, specializing in Persian lamb hats and coats. Irving distinguished himself academically starting at a young age. He graduated from high school at age 15 and the University of Western Ontario medical school at 21. He was one of the first Jewish ophthalmology residents at the University of Michigan in Ann Arbor, where he met Janet Reinstein, who was an undergraduate at Michigan. They married in 1954 at the Chicago apartment of Janet’s parents, Leon and Miriam Reinstein. After completing his residency in 1956, Irving and Janet moved to Minneapolis, where he opened a practice in the Medical Arts Building in downtown Minneapolis. Irving established himself as a leading ophthalmologist who was as devoted to his patients as they were to him. Early in his practice, he started wearing his signature bow ties that would not dangle during eye exams. His practice had monumentally long waiting room times, which his patients happily endured, knowing they would benefit from Dr. Shapiro’s full and compassionate attention during their appointments. He was an early attending physician at Mount Sinai Hospital, which was founded because hospitals in Minneapolis at the time would not allow Jewish physicians to serve on their staff. In the early days of his practice, Dr. Shapiro provided medical care on weekends at the state prison in Stillwater. He was a skilled surgeon and an early adopter of multiple innovations in treatment of cataracts, corneal transplants, retinal detachment, and laser surgery. His medical practice continues as Eye Care Associates, which includes his former partners, Dr. Robert Warshawsky and Dr. Neal Sher. He was also clinical professor of ophthalmology and neurology at the University of Minnesota and author of scholarly articles. Dr. Shapiro was the founding medical director of the Phillips Eye Institute (PEI) in 1987. Dr. Shapiro called the PEI a “community of interest.” His vision was that the PEI would have both a clinical and research mission, and that any ophthalmologist in the area could treat patients in its facilities. Now, with more than 15,000 patients treated annually, the PEI is the second largest specialty eye hospital in the nation. In addition to his medical work, Dr. Shapiro took a leadership role in making the PEI a philanthropic force in the economic and social development of the local community. He helped rebuild the Phillips neighborhood and was also instrumental in establishing the Early Youth Eyecare Community Initiative, which provides vision screening and subsequent treatment services to children in Minneapolis and St. Paul public schools. He also worked with the late Twins star Kirby Puckett to raise awareness of the importance of screening for eye disease. Irving Shapiro was a tremendous intellectual force and a man of great personal dignity and graciousness. An incredibly attentive listener and always thoughtful in his responses, he treated everyone he encountered with utmost regard and kindness. Whether impeccably attired as a physician or bearded during the long summer vacations he took with his family, he was simultaneously understated in his presence, while commanding attention simply by uttering a soft-spoken sentence or making an astute observation. Upon Irving’s retirement from the PEI, Vice President Mondale said of Irving and Janet, “They are very eloquent in what they do, but very modest in what they claim.” Irving also had a wonderful sense of humor. He passed along his joy of punning and ability to laugh at himself, and particularly his own jokes, to his children and grandchildren. And while Irving’s focus in life was largely professional, it was clear to all who knew him that nothing was more important to him than being surrounded by family. Whether playing tennis with all generations, which he did until age 90, having dinner with family every night, or sitting on the dock reflecting on the beauty of Lake Superior and the state of the world, Irving took tremendous joy in spending time with those he loved. He was intensely proud of the achievements of his children in academia, journalism, and arts and education. With his wife Janet, Irving was an active member of the Minneapolis Democratic political community and a great supporter of and counselor to politicians over the past 60 years. Irving also shared a love of the arts with Janet. In addition to attending numerous concerts and plays in the vibrant Minneapolis arts community throughout the years, Irving was board member of Madeline Island Chamber Music. Irving is survived by his children Matthew Shapiro (Susan Garetz), Eben Shapiro (Susan Atkins), Hugh Shapiro (Limin Liu), Ann Stern (Willy Stern) and his grandchildren, Benjamin, Molly, Emily, Isaac, Max, Eli, Zack, and Phoebe. A memorial service will be held at 11:00 am FRIDAY, January 17th at TEMPLE ISRAEL, 2323 Fremont Ave South, Minneapolis. In lieu of flowers, memorials preferred to The Phillips Eye Institute Irving and Janet Shapiro Innovative Technology Fund.

The family of Dr. Irving Shapiro created this Life Tributes page to make it easy to share your memories.