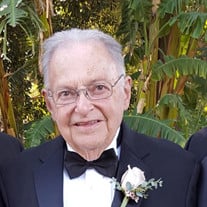 Herbert "Herbie" Bernick “Mr. Milbern”, age 90, of St. Paul, MN, died peacefully on February 7, 2021 surrounded by his loving family. He always had a warm smile, a kind word and a cute joke. Herbie was born and raised in St. Paul, attended Central High School and graduated from the University of Minnesota with a bachelor’s degree in business. After college, Herbie proudly served in the Army. He was stationed in Germany just as the Korean War was ending. He continued serving his country in the Army Reserve until retiring with the rank of Colonel. After returning from active duty, Herb enrolled in graduate courses at the U of M, where he met the love of his life, Marcia, an underclassman. They were married in 1956 and together raised three children, 10 grandchildren and 4 great grandchildren. Herbie and Marcia loved family above all else. They treasured spending time with their family and developed traditions that lasted decades, including traveling and Friday night dinners. Wintering in Florida with family and friends was a true gift. Although his family always came first, his clothing store was a close second. After a short stint working for the City of St. Paul’s finance department, Herb’s entrepreneurial spirit led him to establish Milbern Clothing Company in the Midway area of St. Paul in 1956. Herbie was passionate about the men’s retail clothing business and worked tirelessly to earn the trust and respect of his customers and employees. He was grateful for his customers and never, ever took their loyalty for granted. Customers became friends and friends became customers. He treated his employees like family. Herbie was very proud that his son Steve and grandson Andrew are continuing the family business. Herbie was a strong supporter of the St. Paul business community and many local charities. He was a long-time member of the Osman Shrine and the Royal Order of Jesters, where he perfected his clowning skills as “Zippo.” Herbie is survived by his devoted, caring and loving wife of almost 65 years, Marcia; daughter Sheila (David) Rutman, sons Alan (Lisa) Bernick and Steven (Vivian) Bernick; grandchildren Marni (Brent) Gensler, Rochelle (Chris) Rogers, Allison (Andrew) Lifson, Charles Rutman, Joshua (Ashley) Bernick, Daniel Bernick, Matthew Bernick, Jacquelyn (Adam) Wittenberg, Jennifer (Jake) Glickstein and Andrew Bernick; great grandchildren Liam and Eva Gensler, Cecilia Rogers and Oliver Bernick; brothers Sheldon (Penny) Bernick and Saul (Maureen) Bernick, and sister Arlene (Larry) Mills; and many nieces, nephews, cousins and life-long dear friends. Herbie was preceded in death by his parents Milton and Bernice Bernick. The family wishes to thank the many health professionals who provided care and comfort to Herb over the years. He will be dearly missed. Private family graveside funeral and burial service. Zoom Shiva 7:00 pm CST Thursday. Email [email protected] for link. In lieu of flowers, memorials are preferred to Shriners Hospital for Children Twin Cities donate.lovetotherescue.org; Jewish War Veterans Department of Minnesota www.mnjwv.org; Sholom Home East https://giving.sholom.com/sslpage.aspx?pid=391; or Temple of Aaron Synagogue templeofaaron.org.

The family of Herbert "Herbie" Bernick "Mr. Milbern" created this Life Tributes page to make it easy to share your memories.