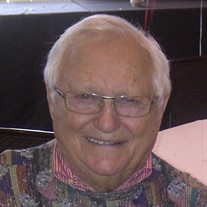 Henry Goldstein, 97, of St. Louis Park, died peacefully on March 18, 2021. Henry was a true family man. There wasn’t anything he wouldn’t do for his wife of 70 years, Gertrude, or for his three children, five grandchildren and seven great-grandchildren. “Papa” didn’t miss a music concert, graduation, baseball game, dance recital, basketball game, birthday party, gymnastics meet, backyard barbecue, swim meet—you name it—if it meant he could support his loved ones. He lived for family dinners where he always liked the food and loved the company. Henry was the first of his family born in the U.S. and spoke Yiddish with his mother. His friends affectionately called him by his Jewish name, “Enoch.” Henry grew up on the Old North Side of Minneapolis and was a star basketball player at North High. He had a fantastic sense of humor and a beautiful voice. As a Technical Sergeant in the army during WWII, he led a company of soldiers in the Philippines. He sang at USO shows and was deemed by the Minneapolis newspaper, “The Singing Soldier of the South Pacific.” Henry was a respected businessman and the long-time owner of Baker Furniture Manufacturing, which produced custom sofas to countless hotels and private homes in the Midwest. Henry built strong friendships in every stage of his life—from his childhood friends, to his employees, to caregivers in his final years—because he was a great listener, and a compassionate, generous and kind human. Henry is preceded in death by wife, Gertrude; parents, Bertha and Morris; brother, Irving; and sister, Pearl. He is survived by children, Michael "Mickey" (Paula Carlson), David (Don Pastor), Barbara (Barry Rosenzweig); grandchildren, Greg (Annette) Goldstein, Claire (Matthew) Swanson, Lauren, Sydney and Taylor Rosenzweig; great-grandchildren, Kylie, Adam, Eleanor, Noah, Clark, Max and Louisa; as well as nephew, Marvin (Elaine) Gale; and niece, Arlene (Sandy) Weinstock. Special thanks to his caregivers, Jeremy, Pam, Marcia and others who helped Henry over his last years. He loved them all. Zoom funeral service 12:00 pm SUNDAY, March 21, 2021. For link email [email protected] Zoom Shiva Sunday & Monday 7:00 pm via the same Zoom link. In lieu of flowers, memorials preferred to JFCS, Sholom Foundation or donor’s favorite charity.

Henry Goldstein, 97, of St. Louis Park, died peacefully on March 18, 2021. Henry was a true family man. There wasn&#8217;t anything he wouldn&#8217;t do for his wife of 70 years, Gertrude, or for his three children, five grandchildren and seven... View Obituary & Service Information

The family of Henry B. Goldstein created this Life Tributes page to make it easy to share your memories.