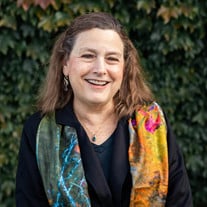 Helen Q. Kivnick, age 70 of Mpls, passed away September 14, 2020. Preceded in death by her parents, Arnold and Stella Kivnick. Survived by husband of nearly forty years, Gary Gardner; brothers, Eric (Susan Kikuchi), Seth (Amy); nieces, Cassey, Alexandra, Jane, Elena. Helen was born in Philadelphia, was among the first women at Yale University (B.A., 1972), and received her M.A. (1975) and Ph.D. (1980) from the University of Michigan. She was a licensed clinical psychologist and a licensed clinical social worker. Initially trained as a clinical psychologist, Helen worked for over thirty years in practice, programming, research, and teaching concerning the promotion of healthy life-cycle development, the arts, and intercultural relations. She lectured both nationally and internationally on these topics. She had been a Professor of Social Work at the University of Minnesota since 1990. In Vital Involvement in Old Age, (1986) Kivnick collaborated with renowned developmentalist Erik Erikson in reconceptualizing his theory of lifelong psychosocial development to permit clear operationalization of psychosocial health at each stage of the life cycle. From this work the Vital Involvement construct emerged. Kivnick spearheaded the evolution of Vital Involvement Practice – a strength-based approach to counseling; teaching; programming; health care practice; administration, seeking to optimize their personal vitality, competence, and community engagement. The approach has been implemented in assisted living facilities, nursing homes, senior housing, and county-based case management programs; it is currently being modified for use in optimizing “encore careers,” “engaged retirement,” and “living with chronic illness”. Helen was also a trained musician, and her work reflected abiding emphases on the value of lifelong arts participation, on social justice, and on personal vitality while living under such adverse circumstances as serious disease and social discrimination and oppression. Along with Gary Gardner she produced two commercially released record albums (Mbube! Zulu Men’s Singing Competition (1987) ((nominated for a 1987 Grammy Award)); Let Their Voices Be Heard: Traditional singing in South Africa (1987)), and one commercially released cassette tape (Images of Aging: Music and musing (1984)). Kivnick founded and served as Executive Director of CitySongs: Healthy Youth and Community Development through Music. CitySongs used singing (rehearsal and performance activities) as a way to promote healthy behavior and development among at-risk youth, to enrich inner-city neighborhood development, and to enhance racial and ethnic relations in the Twin Cities. She served on the initial Advisory Board of the Twin Cities-based Giving Voice Chorus, a groundbreaking set of choirs for people with Alzheimer’s disease, care partners, and community volunteers. She was the founding editor of the Humanities and Arts section of The Gerontologist, where until her death she edited the On Film and Digital Media section. She served as Co-PI on a recently completed NEA-funded study of the influence of a songwriting program on the mental and social health of low-income elders. Her honors and awards included the University of Minnesota Community Service Award (2002), the University of Minnesota Josie R. Johnson Human Rights and Social Justice Award (2007), Fellow of the Gerontological Society of America (2009), and the Minnesota Gerontological Society Gerontologist of the Year (2017). Helen was diagnosed with metastatic lung cancer in 2016, but the main problem leading to her death appeared to be a sudden attack of pneumonia, leading to sepsis. This was not obviously directly related to her cancer. Contributions in her honor may be made to the Kivnick-Gardner Fund for the Arts and Social Work in the University of Minnesota Foundation, the Masonic Cancer Center of the University of Minnesota, Temple Israel, and the Southern Poverty Law Center. Zoom funeral service THURSDAY, Sept. 17, 2020 at 12:00 pm, zoom Shiva Thursday, 7:00pm. Email [email protected] for the zoom link.

The family of Helen Q. Kivnick created this Life Tributes page to make it easy to share your memories.