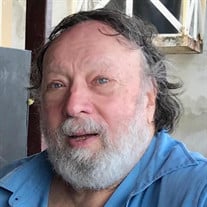 Gregory Joseph John Tetrault passed away September 5, 2021 surrounded by his family at his home following a brief battle with cholangiocarcinoma. Greg was born October 13, 1946 to Frederick and Edith (Urbanski) Tetrault in Toronto, ON. His childhood was spent in Toronto, Ottawa, Sherbrook, QC, and Arnes, MB where he helped out on his grandmother's farm every summer. He studied engineering at McGill University in Montreal. Over his lifetime, Greg worked as an engineer, special effects artist, entrepreneur, inventor, writer, and concessionaire. In addition to his work, Greg loved reading, traveling, meeting new people, and being a husband, father and grandfather. He was creative, brilliant, funny, and generous with his time and varied skills. Greg was the youngest of four children and the only boy. He was a studious, quiet boy and a voracious reader. He learned how to build using mechanical construction kits, and his father taught him electronics. This was the beginning of his life-long love affair with design and construction. Greg’s childhood summers were spent at their grandmother’s farm in Arnes, Manitoba, a Ukrainian farming community on the prairie near Lake Winnipeg. The farm had no running water or electricity. Everyone arose at daybreak to bring in the cows, feed the chickens, look after the calves, catch mice in the barn, bring in the crops, and carry pumped water to the house. Greg met his wife to be, Maxine, on a hike in Banff National Park in Alberta, Canada. He traveled to see her, and they eventually married in Minneapolis in 1976. In 1984, they welcomed their daughter, Marta into the world. Greg was an extraordinary father who sewed the best Halloween costumes including proportional monarch butterfly wings, jockey silks, and a penguin costume (the year of the 1991 Halloween blizzard!). In 1985, Greg and Max bought their home in Linden Hills. Over the years Greg re-shaped the home from top to bottom. With his remarkable skills he replaced the furnace, totally rewired, and re-plumbed their 1909 house. He built a two-story addition with sunroom, new bathroom, and new master bedroom. There was the remodeled kitchen, and every wall in their home he insulated, and he put in a fuel-efficient fireplace. Their home was so fuel-efficient that Xcel Energy once contacted them, suspicious that they had somehow rigged the gas meter because their winter heating bills were so low. Greg was able to re-imagine physical space and its possibilities. His predilection for design and mechanical problem solving led him into the film and television industries, he worked on the feature film Purple Rain and as a special effects artist for TV commercials and films. Starting in 1970, Greg and Max worked together at the Minnesota State Fair where they ran her family concessions. Greg looked after all the equipment – from freezers to snow cone machines to ovens for a baked potato stand. Greg also had the idea for Lingonberry ice cream. Greg’s skill and vast tool collection was always available if a fellow concessionaire needed help repairing a damaged piece of equipment. Instead of accepting payment for his help, Greg would say, ‘Pass it on.’ Greg and Max traveled North America from coast to coast and spent their 6-week honeymoon driving Europe. They traveled in Sri Lanka, Indonesia, India, Egypt, Greece, Iceland (before it was a destination), Tahiti, the Caribbean, Spain, Russia, Ireland, and camped in New Zealand. But it’s likely Greg’s favorite destination was his sister Diane’s cottage in the Canadian northland. Every summer, Greg, Max, and Marta would drive to Toronto and then on to Haliburton. Just like the farm of his youth, there was no electricity or running water. Time was spent talking, fishing, swimming, cooking, sleeping, and reading. Days spent at the cabin existed outside of time. They had quiet family time and fun. Greg is survived by his wife, Maxine W. Davis; daughter, Marta Davis-Tetrault Powers (Chris); granddaughter, Thera; sisters, Diane Celotti and Cookie Lewis; sister-in-law, Lynn Davis (Rudy Wurlitzer); nieces, Cara Celotti (Tom Nicolopoulos) and Mandy Lewis; and nephews, JC Lewis and Toby Lewis. He is preceded in death by his parents, sister Monica Tetrault; niece, Nina Celotti; and nephew, Ayrev Davis-Harshbarger. An outdoor memorial service will be held Sunday, September 19, 2021 at 1pm. MASKS REQUIRED. Contact Hodroff-Epstein for address. In lieu of flowers, the family requests that memorial gifts be made in memory of Gregory Tetrault to Mayo Clinic for Bile Duct Cancer Research, www.philanthropy.mayoclinic.org or to Mary’s Place, Sharing & Caring Hands, www.sharingandcaringhands.org/donate.

Gregory Joseph John Tetrault passed away September 5, 2021 surrounded by his family at his home following a brief battle with cholangiocarcinoma. Greg was born October 13, 1946 to Frederick and Edith (Urbanski) Tetrault in Toronto, ON. His... View Obituary & Service Information

The family of Gregory Joseph John Tetrault created this Life Tributes page to make it easy to share your memories.