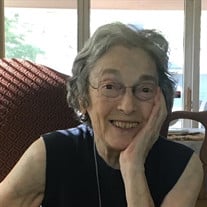 Gerda Schild Haas is a survivor of the Theresienstadt concentration camp and founder of the Holocaust and Human Rights Center of Maine. She is author of “These I Do Remember; Fragments of the Holocaust”, and the children’s book “Tracking the Holocaust.” Gerda was born in 1922 into a religious family in the small town of Ansbach, Germany. Her father was a kosher butcher and her extended family including sister and grandmother lived above the store. Following Kristallnacht, November 9, 1938, the family was forced to sell their building and move to Munich. Gerda went on to study nursing at the Jewish Hospital in Berlin prior to deportation at age 17. After liberation to Switzerland, she wrote to the International Red Cross and found her father in the United States, the only other family member to survive. Gerda immigrated to New York in 1946, became a US citizen, married Rudolph, and settled in Lewiston. In 1969, Gerda enrolled at Bates College and graduated two years later summa cum laude. She then studied for, and received a Masters in Library Science from the University of Maine, Orono in 1974. Gerda served as a catalog librarian at Bates College from 1972 to 1984. During this time, she worked on and published her first book which chronicles the lives of nine victims of the Shoah, including herself. In the late 1970s, Governor James B. Longley appointed Gerda to the State of Maine Board of Education. In 1982, Gerda received a grant to organize a conference and a state-wide outreach program focused on the Holocaust. In 1985 she became the founding director of the Holocaust and Human Rights Center of Maine, whose mission is to promote universal respect for human rights through exhibits, education and events. “Using the lessons of the Holocaust and other events past and present, we encourage individuals and communities to reflect and act upon their moral responsibilities to confront prejudice, intolerance and discrimination.” Gerda and Rudy Haas moved to St Louis Park upon Rudy’s retirement, and were active members of the religious community and their love of the community was returned by the many visitors who came by every Friday evening and throughout the week. Mrs. Haas’ organizational and creative papers reside in the Edmund S. Muskie Archives at Bates College. Her husband Dr. Rudolph Haas (Z”l) passed away in 2006. She is survived by her four children, Leonard, Pauline, Hedy and David, as well as eleven grandchildren and five great-grandchildren. The Levaya will be 12 pm FRIDAY June 25th at the UNITED HEBREW BROTHERHOOD CEMETERY CHAPEL, 2605 W 70 1/2 St, Richfield, MN 55423 ﻿To receive a zoom link of the levaya, please send an email to [email protected] Davening times: Shacharis Sun-Thurs 8:00 am. Mincha/Maariv Sun-Wed 8:45 pm. Shiva Times Sun-Wed: 8:30-10:00 am, 1:00-3:00 pm, and 7:00-8:45 pm before minchah/maariv. In lieu of flowers memorial are preferred to the donor's favorite charity. Hamakom Yenachem Eschem B'soch Sha'ar Avelei Tzion V'yerushalayim.

Gerda Schild Haas is a survivor of the Theresienstadt concentration camp and founder of the Holocaust and Human Rights Center of Maine. She is author of &#8220;These I Do Remember; Fragments of the Holocaust&#8221;, and the children&#8217;s... View Obituary & Service Information

The family of Gerda Schild Haas created this Life Tributes page to make it easy to share your memories.

Gerda Schild Haas is a survivor of the Theresienstadt concentration...