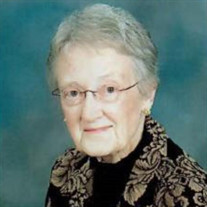 Georgia Kalman, age 94, of Minnetonka, passed away peacefully at home on June 23, 2021. Preceded in death by husband, Ivan; parents, George & Bertha Smith. Survived by daughter and son-in-law, Julie and Robert Fisher. Georgia grew up in Hobart, Indiana, the beloved daughter of two doting parents, Bertha and George Smith. Even as a very young girl she was a gifted singer, dancer and pianist and an outstanding student with beautiful penmanship. She attended Indiana University, graduating with a Masters Degree in Library Science. While at IU, she also met her husband, Ivan, when there was a fateful mix-up at the Delta Zeta sorority house. When Ivan moved back to his hometown of Astoria to complete graduate school at NYU, Georgia moved to Jackson Heights and worked at the Queens Borough Public Library and then as a research librarian at Union Carbide. In 1952, Georgia and Ivan were married at The Pierre in New York City. The couple then moved to Minnesota where Ivan had received an offer to teach at Harrison Elementary School. They joined Temple Israel after attending a Friday evening Sabbath service and meeting Rabbi Albert G. Minda. When Rabbi Minda learned of Georgia and Ivan’s background and education they were offered and happily accepted positions as librarian and teacher, respectively. After living in St. Louis Park for several years, Georgia and Ivan settled in Minnetonka. That same year they added a baby daughter to the family. Georgia and Ivan were wonderful parents who let their daughter eat Hostess chocolate cupcakes for breakfast, never made her eat peas, let her stay up late to watch Johnny Carson, and allowed her to explore all around the Temple neighborhood when she accompanied Georgia to work. Georgia was an exceptional and loving wife and mother who was an accomplished baker and cook, played the piano while the family sang along, tended to all the gardening, painted the house inside and out, sewed couture clothes for the entire family, including Barbie and Ken, indulged her daughter with shopping sprees at Target and Dayton’s, and cheered on the Twins and Vikings and Gophers and all the other home teams. She was always making plans for the family to attend musicals downtown, theater at the Guthrie, and concerts at venues all around the area. Georgia had a passion for nature and loved animals and wildlife, flowers and butterflies, and a few other select insects (ladybugs and bumble bees). The house was always busy with their daughter playing office or dress-up or working on little projects with an arsenal of fabric scraps and craft supplies while Ivan pursued his interests in astronomy, ham radio, music and photography. Today you would call this a family of creatives. Ivan suffered an AVM in 1995 and Georgia dedicated herself to helping her husband resume the activities he enjoyed so much in retirement…working at the Park Nicollet Medical Center in the mailroom, playing his saxophone and taking epic walks. So in addition to being a fantastic and joyful homemaker who could make the perfect flaky pie crust, it was important to Georgia to also make use of her excellent education. For over sixty years she worked at Temple Israel during the regular work week, and also on weekends when religious school was in session, assisting the Temple Israel congregation, clergy, students and general public. Her work as a librarian has preserved the past but she was also a very forward-thinking individual, always considering the important legacy of Temple Israel to future generations. She catalogued and maintained the library book collection as well as an extensive and continuously updated range of documents unique to Temple Israel. In addition to her responsibilities as librarian, she called upon her diplomatic and organizational skills to develop the Bar and Bat Mitzvah schedule (probably her most difficult job!), used her talent for calligraphy to prepare life cycle certificates for members of the congregation, and, if you ever got to stay home from Temple because it was a snow day, you can thank Georgia…she was the person who contacted WCCO to cancel religious and Hebrew school. Georgia was a perfectionist who could actually get things done. Rest assured that Georgia is now with Ivan and she’s reading this obituary and diligently correcting the punctuation and grammar. Much gratitude and love to all of Georgia’s many dear friends and coworkers, the congregation and clergy at Temple Israel, and the wonderful and kind neighbors on Robinwood Drive, especially the Crowley Family. Think of Georgia and read a book to a child, plant a ginkgo tree or feed the birds. Georgia will be missed more than words can say. Graveside service 11:00 am, FRIDAY, June 25th, TEMPLE ISRAEL MEMORIAL PARK, 4200 3rd Ave. S., Mpls. For the Zoom link for the service send an email to [email protected] Memorials preferred to the Georgia and Ivan Kalman Library Fund at Temple Israel.

The family of Georgia Kalman created this Life Tributes page to make it easy to share your memories.