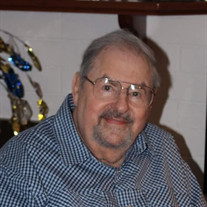 A remarkable life ended on April 13, 2019, when Fred S. Hirsekorn passed away. Fred led a life committed to his country, his community, and his family. He was born in 1924 in Schoenlanke, Germany, to parents Ludwig and Paula Hirsekorn. The family fled the rising anti-Semitism in Germany in 1936, finding refuge in Kansas City. In 1942, at age 18, Fred joined the United States Army to fight for his adopted homeland. During the course of the war, he served with distinction in the 14th Armored Division. He was decorated twice for bravery and became the youngest 1st Sergeant in the European Theatre. Returning from his service, Fred attended the University of Kansas, where he studied chemical engineering and met the love of his life, Barbara Nelkin, who he had the good fortune to marry in 1948. Fred's career took him and his family around the country and around the world, including stints in West Virginia, Kansas, and England. The family eventually settled in Mendota Heights, Minnesota, where Fred would build a successful career and spend his life surrounded by his wife, children, grandchildren, and great-grandchildren, as well as countless friends. Throughout his life, Fred demonstrated his commitment to his community and to helping others. He supported Boy Scouts of America throughout his life, having earned both the rank of Eagle Scout and the Silver Beaver Award. He worked tirelessly on behalf of the American Red Cross, serving as board chair of the St. Paul Chapter in 1989, and was also a staunch advocate for Magen David Adom, the Israeli equivalent of the Red Cross. Fred was particularly proud of his accomplishments as Board Chair of Minnesota Diversified Industries, where he worked to create meaningful employment opportunities for individuals with developmental and physical limitations. Fred was an enthusiastic and talented genealogist. Late in life, he became a writer and chronicled his extraordinary life in a memoir, which will be treasured by his family for generations to come. Then, much to everyone’s surprise, he began writing poetry and prose, offering another window into the life and mind of this remarkable man. More than anything, Fred's joy came from his family and extended family. He is preceded in death by his beloved daughter Robin Greenwood (Mark). He is survived by his wife of seventy years, Barbara (ne. Nelkin), and daughters Susan Ahlquist (David), Ruth Fram (Witt), and Marla Collins (Mark), as well as twelve grandchildren and thirteen great-grandchildren. Fred knew he was loved, and he passed at the very time his family had come together to celebrate his 95 years of life. May his memory be a blessing. The funeral service will be held at HODROFF-EPSTEIN MEMORIAL CHAPEL, 671 Snelling Ave. South, St. Paul, at 11:30 am on MONDAY, April 15. SHIVA will be held at 1700 Lexington Ave. South, on Monday, April 15, and Tuesday, April 16, at 6:30 pm. Memorials preferred to Robin Beth Greenwood Memorial Fund, UCSF Foundation; Jewish Family Service, St. Paul; or Allina Hospice Foundation.

A remarkable life ended on April 13, 2019, when Fred S. Hirsekorn passed away. Fred led a life committed to his country, his community, and his family. He was born in 1924 in Schoenlanke, Germany, to parents Ludwig and Paula Hirsekorn. The... View Obituary & Service Information

The family of Fred S Hirsekorn created this Life Tributes page to make it easy to share your memories.