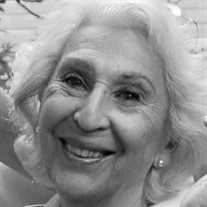 Fay Gerrick Harris, wife of the late Harold, mother of Alan (Linda Chaplik), and Scott (Cheryl Ellenby), Nana to Hugh (Amy Liu) and Sophie (Harry) Vorhoff, daughter of the late Ann and the late Max Gerrick , sister of the late Miriam (the late Sid) Harris and the late Judy (the late Jerome) Rose, cousin to Jordan Kaplan and aunt, cousin and friend to so many. Fay lived an extraordinary life of 99 years devoted to her family, both immediate and extended. She grew up in the Austin neighborhood of Chicago surrounded by her grandparents, aunts and uncles, and soon after marrying moved to Skokie, Illinois where she and Harold raised their family. They lived in Skokie until moving as empty nesters into Chicago’s bustling new Lakeview scene of the early 70s. Harold and Fay had a story book marriage filled with love of family, golf and travel. She was known, both to the friends of her sons and grandchildren, as the "hottie" mom/grandmother because of her exuberance and beauty. Ahead of her time, Fay was a working mom who spent cherished years working in interior design, including in the employ of her dear friend David Russ. In her quiet, gentle, but resolute manner, Fay endured the loss of her husband Harold, the love of her life, in 1986 and soon thereafter bravely challenged herself. At the age of 70, wanting to be a daily part of her very new grandchildren’s lives, Fay moved from Chicago to Minneapolis where her son Scott and his growing family lived. She quickly became the toast of the town as Minneapolis discovered her natural charm, warmth and dedication to people. But her love and devotion to Hugh and Sophie, and their love and devotion for her, were unmatched. Sleepovers at Nana’s and samples at Byerlys became one of many rituals these three shared regularly. And because family meant everything, Fay arranged for spring breaks in Europe for all of her children and grandchildren, staying at magnificent rental homes well before there were any Airbnbs or VRBOs. By her late 80s with her grandchildren grown and off to school, Fay focused on yet another challenge and opportunity to give back. This was her volunteering as a teacher’s aide and tutor for a diverse, exciting and loving elementary school near her home in Minnetonka. Nothing was more exciting than celebrating Fay’s birthday at Aquila School where the children made cards, posters and had treats in honor of "Fay Day". She often said that the children and staff at school added years to her life. Fay was loved by all who knew her. Her daughters-in-law had a best friend in Fay. So many people did. She cared more about others than herself. She opened her splendid home to so many with love. Most of all, she valued kindness, appreciation and respect for others. She was incapable of hurting anyone. Those who knew her were in awe. She was magnificent inside and out and these gifts were exchanged with her newest, remarkable friends and caregivers, Felicia Ford, Libby Edelston, Rabin Osborne and Laya Osborne. Hers are often labeled simple gifts when they truly are so rare. They are why living without her, despite the richness and beauty of her life, will be so painful. She will be missed beyond description. To keep everyone safe and healthy, the interment service will be private. In lieu of flowers, memorial contributions may be made to National Council of Jewish Women, www.ncjwmn.org, Jewish Family and Children’s Service, ACT program, www.jfcsmpls.org or Friends of Lafitte Greenway, www.lafittegreenway.org/donate. To attend the funeral live stream on Sunday 1:30PM CT and for zoom shiva information, please visit our website. Arrangements by Chicago Jewish Funerals-Skokie Chapel, 847.229.8822, www.cjfinfo.com

The family of Fay Gerrick Harris created this Life Tributes page to make it easy to share your memories.