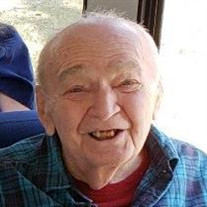 Dr. Edward A. Fletcher, age 93, of Minneapolis, passed away June 12, 2018. He is preceded in death by parents, Morris and Lillian Fletcher; siblings, Albert (Violet) Fletcher, Anne (Carl) Lieberman and, Belle (George) Malinoff. Survived by wife of 70 years, Dr. Roslyn Fletcher; daughters, Judith Fletcher (John Rathé), Dr. Deborah Fletcher and, Dr. Carolyn (Kevin) Brochman; grandchildren, Adam Kruma (Javi Kuncar), Zarya Rathé (Chris Wright) and, Anuta Rathé (Alejandro Ceballos); great- grandchildren, Gwinna Rathé and Olivia Kuncar; and his graduate students. Eddie enlisted as a WWII Navy pilot, flying in the Pacific at 1” shorter than the allowed minimum, with a co-pilot who was 1” taller than the maximum limit. He earned a Bachelor of Science degree in chemistry in 1948 at Wayne State University, PhD in chemistry under H.C.Brown at Purdue in 1952, and from there went to NACA (now NASA) in Cleveland, Ohio, studying solid rocket fuels and propulsion. He was invited to the University of Minnesota Mechanical Engineering Department in 1960, and remained there until becoming Professor Emeritus in 2000. His career evolved from being a rocket scientist, to work in combustion and thermodynamics. His interest in making a contribution of greater benefit to society led him to his most rewarding work, as a solar scientist. Always bringing his imagination to the application of his vast and precise understanding of several fields of science, he is credited with developing an entirely new field. His students and others call him the Father of Solar Thermochemistry. There are several generations of solar scientists all over the world continuing work that began with concepts he and his graduate students developed. Perhaps the most important, is an elegantly simple idea that uses solar energy and water to create a fuel that can be stored and used on the scale of power plants, yielding back only clean energy and water. He met and “wooed” his wife Ros at Wayne State. Following her to Purdue, his persistence finally lured her attention away from her studies long enough to realize that she liked his company, and wanted to marry him. They shared their years raising children, traveling, going to the theater and concerts, dinner with friends, and keeping company in the evenings—each at their own desk—studying and writing lectures. In addition to being a very competitive squash player and biking to work, he was an avid skier, and—following the lead of one of his grad students—served as a National Ski Patrol at Buck Hill for many years. He and Ros enjoyed a University square dancing group for many years. He taught himself several languages well enough to communicate during sabbaticals in Israel at the Technion, and France at the University of Poitiers. Despite his time in France he was basically a meat-and-potatoes guy, and his favorite vegetable was chocolate.He passed on to his daughters to various degrees a great love of music including classical music, opera, 50’s pop and jazz; skills and love of traveling; appreciation for learning new languages; firm grounding in doing the right thing for its own sake, social justice, and presumption of determining right action by the highest ethical criteria.He adored his grandchildren, and they each have special loving memories of time spent with him: from first football games and skiing in the mountains, to exploring the science museum, horsing around, and getting the best hugs ever.His graduate students were always part of the family. He was concerned with the well-being of their spouses and children, as well. His teaching extended beyond the classroom, to mentoring in other aspects of building a good life. His own last year’s became very challenging due to onset of Lewy body dementia, with its attendant delusions and hallucinations. He was able to—always teaching—describe the hallucinatory experiences in remarkable detail, and enlist help exploring ways to separate them from the real world around him. Ed and his family are forever grateful to his physicians Dr. Ralph Shapiro and Dr. Abigail Houts, and to his extraordinary family of caregivers at Jennifer Morgan’s Breck Home Residential Care Center. Funeral service 3:00 P.M., FRIDAY, June 15th, at ADATH YESHURUN CEMETERY CHAPEL, 5605 France Ave. S., Edina. In lieu of flowers, memorials preferred to Mazon: A Jewish Response to Hunger, [email protected]" title="Click to open in a new window or tab" target="_blank" rel="nofollow noopener">[email protected] SHIVA 7P.M. Saturday at 3909 Beard Ave. S., Minneapolis.

The family of Edward Abraham Fletcher created this Life Tributes page to make it easy to share your memories.

Dr. Edward A. Fletcher, age 93, of Minneapolis, passed away June...