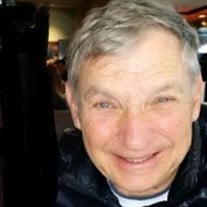 David Benjamin Rosenblatt, age 78, passed away peacefully on March 5th after a courageous three year battle with cancer. He was born to Justin & Phyllis Rosenblatt in Minneapolis. The oldest of three children, David attended the BlakeSchool and went on to attend the Wharton School of the University of Pennsylvania. After graduation, David returned to Minneapolis to join the family clothing business, DB Rosenblatt, Inc., where he eventually became president. He later launched a second career as a successful commercial insurance broker. He married his soulmate, Carol, who was his life partner and best friend for over 54 years. They had two wonderful children, Jill (Yarden) and Brad (Heather), and five grandchildren, Tatum, Eliana, Avery, Wyatt and Mia. All five grandchildren loved their DB and cherish their special memories of him. David is also survived by his brother, Skip Rosenblatt (Kathy), sister, Debbi Kusnetz, and nephews, Justin Rosenblatt, Scott Sokol and Hart Rosenblatt. David was known for his cheerful smile, and contagious laugh. His intellectual curiosity and genuine interest in people’s lives made everyone believe he was their best friend. He cultivated friendships throughout the country and across all stages of his life. David loved to travel and play tennis, as well as take walks along lakefronts and beaches with Carol and their friends. He spent the winters in La Jolla, loved reading the Wall Street Journal, playing Sudoku and card games, and analyzing the stock market. David will be incredibly missed by everyone who knew him. Funeral services will be held via Zoom on Monday, March 8th at 1 pm, with shiva at 7 pm. Email [email protected] for the zoom link. Memorials can be sent to LUNGevity ALK Positive Fund or Temple Israel, Minneapolis.

David Benjamin Rosenblatt, age 78, passed away peacefully on March 5th after a courageous three year battle with cancer. He was born to Justin & Phyllis Rosenblatt in Minneapolis. The oldest of three children, David attended the BlakeSchool... View Obituary & Service Information

The family of David Benjamin Rosenblatt created this Life Tributes page to make it easy to share your memories.