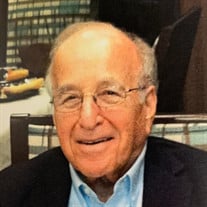 David Feinberg died peacefully at home on March 7, 2022 at the age of 99, just 4 months short of his 100th birthday. He was a loving father, grandfather, great-grandfather, brother, uncle, and friend to many. David grew up on the NorthSide of Minneapolis and (after moving to South Minneapolis) graduated from West High School. As a member of the “Greatest Generation”, he served as an officer in the Army Air Corps during WWII flying the B29 aircraft and married Helene Silverman (who he met at the University of Minnesota) while in the service. After the War, David returned to “The U” where he graduated with a degree in Mechanical Engineering. His successful business career started at US Air Corp (a company founded by his father) and ended at EMC Corp after he sold the company and finally retired at the young age of 83. Throughout his 43 years at EMC as President and CEO, David engineered several acquisitions, including Radio Recorders in Hollywood, California and various spinoffs. David was a pioneer in the educational materials and publishing world, always trying to stay current with technology and ahead of innovative delivery methods. David played a major role in Tikun Olam— making a huge difference and seeking to make the world a better place for all. He will be remembered by many throughout the Twin Cities for his enormous generosity and support of so many organizations. He was most proud of the Feinberg Scholars at the University of Minnesota College of Science and Engineering, the Total Joint Replacement Center at United Hospital, the swimming pool at St. Paul Children's Hospital and the David Feinberg Aquatics and Vitality Center at the Shaller Family Campus of Sholom in St. Paul. His legacy will live on in the many foundations that will benefit from his generosity for generations to come. David loved traveling and sailing and had the good fortune to do both. He was able to travel the world with friends, family, and co-workers both for business and pleasure. He passed that love on to his children and grandchildren as well. Some of his most cherished travels were his many sailing charters with family in the British Virgin Islands and Grenadine Islands. As the proud patriarch, David’s greatest joy was his family and nothing made him happier than being with his children, grandchildren, great-grandchildren, nieces, nephews, and great nieces and nephews and seeing them all succeed. He had great integrity and instilled a sense of drive, compassion, values, and kindness in his children and grandchildren who will carry on his legacy. David is preceded in death by his parents Albert and Ada Feinberg, sister Jean Gordon, brother-in-law Leonard Gordon, and beloved nephews Richard (“Rick”) Gordon and Robert (Bob) Ketroser. He is survived by his children Donald Feinberg and Susan (Gerry) Hughes; grandchildren Daniel (Jennifer) Feinberg, Michael Hughes and Mollie (Andrew) Levy; his 3 great-grandsons Adrien Laos, Devir Feinberg and Emerson Levy; many loving and very special nieces and nephews; and his long-time aid, Tommi Proue, who took incredible care of him. Services will be held at a later date. In lieu of flowers, please consider donations made to some of the places and things that meant the most to David: Sholom Home, Temple Israel, United Hospital of St. Paul.

David Feinberg died peacefully at home on March 7, 2022 at the age of 99, just 4 months short of his 100th birthday. He was a loving father, grandfather, great-grandfather, brother, uncle, and friend to many. David grew up on the NorthSide... View Obituary & Service Information

The family of David E. Feinberg created this Life Tributes page to make it easy to share your memories.