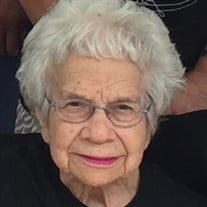 Carolyn "Carrie" Kahn Passed away peacefully on April 1, 2019 at the age of 91 surrounded by her loving family. Predeceased by parents Jay and Beulah Glaser, and brother David Glaser. Survived by husband, Joseph Kahn; children, Bruce (Amy) of Rochester NY, Barbara (Randy) Trefethren of Eagan, Robert (Cécile) of Geneva, Switzerland; grandchildren, Josh, Brandon, Juliette, Adrien, Sally, and Max. Carrie was a descendant of Joseph and Amelia Ullmann, who came to St. Paul from Alsace (Germany) in 1855. The Ullmann's were one of the founding families of Mt. Zion Temple, and became one of the largest fur traders in the world. Carrie was born in La Crosse, Wisconsin, and grew up in Hollywood, California. She attended Hollywood High School and graduated from the University of MN in 1948. Carrie had a beautiful voice and was one of the first cantorial soloists to sing in a Reform Jewish congregation both in Fargo and in St. Paul. Throughout her life she was very active at Mt. Zion Temple, and served as the secretary to Rabbi Gunther Plaut. She was a lifelong volunteer at the Red Cross in St. Paul. The family wishes to thank the staffs of The Wellington Senior Living and Allina Hospice for their attentive care and kindness. Funeral service 2 p.m. MONDAY April 8th at Mount Zion Temple, 1300 Summit Ave., St. Paul. In lieu of flowers, donations may be made to Mount Zion Temple or to the donor’s favorite charity. SHIVA Monday 7 p.m. at Mount Zion Temple. Also, Rochester, NY, Sunday, April 14, 2019, 4-8 p.m. Minyan at 7 p.m., 265 Viennawood Dr.

The family of Carolyn "Carrie" Kahn created this Life Tributes page to make it easy to share your memories.