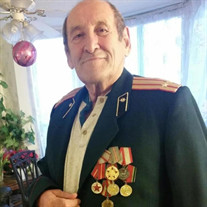 Boris Vinokur, age 81, of St. Paul, passed away August 9, 2020. Preceded in death by parents, Lev Vinokur & Lyubov Skolovskaya. Survived by wife, Fanya; children, Lyudmila Yutsus, Alexandr Vinokur; grandchildren, Kristina Atwater, Layma Laposky, Simon Vinokur; great-grandchildren, Lillian Boyd, Aiden Atwater, Austin Laposky, Baby Atwater; brother, Simon Barsky (Sofiya), nephews, Slava Barsky (Svetlana) and Max Barsky (Dina). Boris Lvovich Vinokur was born on February 21st, 1939 in Ryzin, Ukraine. Just like other kids, he attended school, was a pioneer and a komsamolets, played an accordion and participated in some music competitions. His childhood unfolded during the hard times of World War II and he lost his father to that war. His mother got remarried and had his brother, Simon. After high school, Boris finished military college with highest achievements as a Lieutenant. No matter where he served, he was one of the best officers and loved by his soldiers. After his 35 years of military career, he earned the rank of a Lieutenant Colonel. In 1963, he married his wife, Fanya, a young teacher. They had a daughter, Lyudmila and a son, Alexandr. Boris was a great husband, father and a grandfather to his three grandkids. In 2001, Boris and his family moved to the United States of America. His granddaughters gifted him with three great-grandchildren and one more on the way. Boris became an amazing great-grandfather and poured his soul into raising them. He was always the life of the party and will be missed by all of his friends. We will never forget him and Boris will be forever in our hearts. Graveside service 11:00 am, FRIDAY, August 14, 2020, GEMELUS CHESED CEMETERY, 7032 Penn Ave. S., Richfield. For funeral Zoom link send email to [email protected]

The family of Boris Lvovich Vinokur created this Life Tributes page to make it easy to share your memories.