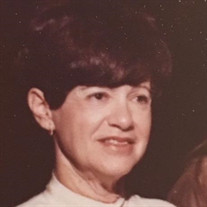 Betty L. Strem (nee Miller), 98, died peacefully March 27 in San Rafael, California. Former resident of St. Paul, MN. Born in Pittsburgh, PA, daughter of William and Flory Miller. Preceded in death by her loving husband, Dr. Edward L. Strem, sister Eleanor Miller, brother,Richard Miller and son-in-law David Kitaen. She is survived by daughters Eleanor Meade (Jack), Jackie Kitaen and Robyn Cook (David); grandchildren, Andrew Meade (Janet), Sarah Sweney (Jon), Lizzi Kitaen Sanchez (Adrian); great-grandchildren Drew and Josh Meade,Evan and Ella Sweney; Sugar Louise Sanchez; nephews, Michael Strem (Ann) and Roger Strem. Little did our Mother know that meeting and marrying Eddie Strem would be the journey of her life. As a girl growing up in the leafy Squirrel Hill neighborhood of Pittsburgh, as the daughter of a prominent builder and contractor, she thought her life would continue uneventfully among her family and peers in Pittsburgh. She met Eddie through her brother Dick and his wife Jerry at a time when Eddie was visiting his relatives in Pittsburgh. He was handsome and smart; she was gorgeous and vivacious. They fell in love (rather quickly!) and married in November, 1941. This is where her journey began. Eddie had completed his medical residency in St. Paul and was ready to start a practice there. The war intervened and after their marriage Eddie was ordered for training in Indio, California. Betty crossed the country by train to join him and live among other military wives in circumstances that could only be called roughing it. Eddie was called to the Pacific theater as a medic and Betty became pregnant with their first born child, Eleanor Sue. In time Betty and baby Ellie would live in Pittsburgh and St. Paul as they were cared for by relatives. Ellie did not meet her Dad until after the war. In time, the couple would reside in St. Paul, spending part of the year at their condo in Longboat Key, FL. Eventually, they drew up a pact that they would retire to warmer climes when Eddie turned 70. Thus, the move to San Rafael, CA to be close to Jackie and her husband, David. The rest of her good long life was spent enjoying retirement golfing, attending local symphonies, taking daily walks, and traveling to Minnesota tor visits with family and friends. She took particular joy in her grand and great grandchildren. There was no bigger fan of all things baseball than Betty. Her children recall that while growing up she would have every radio in the house blasting the games. She continued this throughout her life up until the last months. She was incredibly knowledgeable about the Twins and an avid supporter of the SF Giants. When Eddie passed away in 2000, Betty continued to live alone until a series of medical issues required her move to assisted living facilities. She moved into L'Chaim House in San Rafael which became her final home. Owners Cary and Manny Kopstein and all the incredible caregivers there made her life safe, comfortable and secure partaking in t'ai chi, storytelling and musical interludes. In the last weeks of her life, Betty was also cared for by the loving team of nurses at Hospice by the Bay in Marin County. We thank them for the care they provided during those sad times. The family wants to especially thank two people who became important figures in Betty's last years. Dr. Brett Mensh was the point man in her medical care, shepherding her through hospital stays and visiting her to monitor her vitals and have a good chat. Len Tallerico from Merrill Lynch thought of Mom as he would his own grandmother. Both of these men treated Betty and her daughters like family. We are deeply grateful for their attention and professionalism. Funeral services 3:00 p.m. MONDAY April 2, at HODROFF-EPSTEIN MEMORIAL CHAPEL, 671 So. Snelling Ave., St. Paul. Memorials are preferred to the donor’s favorite charity

The family of Betty L Strem created this Life Tributes page to make it easy to share your memories.