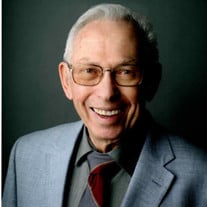 Beloved Husband and Father; Renown Cardiologist Leon, Arthur Sol “Art”, age 90, of Minnetonka, Minnesota, died at home on February 6th, surrounded by his loving family, the music of Nat King Cole, and the sunlight glowing over the marsh behind his home. He is preceded in death by his parents, Alexander and Anna (Schrek) Leon; sister and brother-in-law, Arlene Leon Leider and Bert Leider; and sister-in-law and brother-in-law Evelyn Davidoff and Harold Davidoff. He leaves behind his wife, Gloria Leon (Rakita); sister, Anita Leon; sister and brother-in-law, Mel and Lois Goldstein; sister-in-law, Joanne Dumlao Leon; children, Denise Venables (Charles), Harmon Leon, and Michelle Leon (Steven Neuharth); grandchildren, Noah Venables (Kristin), Courtney Klein (Daniel), Cole Venables, Jae Neuharth, and River Neuharth; great-grandchildren, Abby and Vivienne Venables; nephews, Monte Davidoff, Daniel Goldstein, Niles Goldstein, Mark Leider, Michael Leon, and Robert Leon; nieces, Angelina Leon Brummett, Caryn Goldstein Brisman, Elena Davidoff, Madalyn Davidoff, Roxanne Davidoff, Alexandra Leon Khan, and Cindy Leider Rich; and his “other son” Solomon Tegegn. His younger brother, Harry Leon, passed away on February 11, 2022, just five days after his beloved big brother Art. Harry’s family shared that he had a vision of Arthur in his hospital room shortly after Arthur’s passing. Art Leon was a kind, gentle and caring man. He loved his children, grandchildren, and great-grandchildren deeply and generously. He laughed loudly, and often at inappropriate moments. He was stubborn in the most charming way. Art once walked from 82.7 miles from Orleans to Paris when he lived in France during his stint in the army - simply for the sake of doing it. He was a true original who walked to the beat of his own drum. On family ski vacations, when 99.9% of people at the resort were skiing downhill, Art would be the sole person snowshoeing up hill. Art liked Mardi Gras parades and Minnesota Gopher basketball games. His children remember him bringing a cowbell to the basketball games, that he’d pull out and ring at key moments, causing people in the crowd to turn around and stare. But that didn’t stop him - he would just hide the cowbell under his jacket and ring the bell from there. Art loved his pet dogs and especially liked asking them, “Who’s a good dog?” while feeding them treats until they became obese. He enjoyed hiking, gardening, cross-country skiing, running and walking his good dogs. His career is filled with triumphs and stunning accomplishments, beginning with a B.S. degree at the University of Florida, and M.S. and M.D. degrees from the University of Wisconsin. His specialty training was in biochemistry, internal medicine and cardiology. After his medical residency, he served on active duty with the U. S. Army Medical Corps. He was stationed in France for three years during the period of the Berlin Wall, followed by an assignment to the Walter Reed Army Institute of Research in Washington D.C. At Walter Reed, he carried out research on the effects of exercise on the cardiovascular system, using rodent animal models. Art retired as a colonel in the Army Reserve in 1998 after 38 years of service. Following active duty in the army, he was director of the Clinical Research Center at Newark Beth Israel Medical Center in New Jersey and led the first clinical trials on L-dopa, a drug for Parkinson's disease. In 1973, he was recruited to the University of Minnesota to work on the MRFIT study, an NIH-funded study involving men at high risk of heart attack due to smoking, blood pressure, and cholesterol. Art continued research and teaching at the University of Minnesota for 45 years, first in the School of Public Health, then as an endowed professor in the School of Kinesiology in the College of Education and Human Development, where he served for 20 years as Director, Laboratory of Physiological Hygiene and Exercise Science. Art held the endowed position of Henry L. Taylor Professor of Kinesiology from 1992 until his retirement in 2018. Art is internationally recognized for his exercise physiology research. The scope of his research covered animal, epidemiological and exercise training studies, including the role of physical activity in the prevention of cardiovascular disease. He was lead author on a landmark paper instrumental in the development of national physical activity guidelines for Americans, the U.S. 1996 Surgeon General's report. Art and his colleagues were invited to meet with President Gerald Ford at the White House to present their recommendations. He also was a key member of an international group conducting research on the effects of genetics on the body's response to exercise and aerobic capacity, the HERITAGE Family Study. These and other scientific efforts were highlighted in over 350 peer-reviewed publications. Art received numerous awards for his scientific research. He was a founding member of the American College of Sports Medicine (ACSM) and the recipient of several awards from that organization, including the 2016 Honor award. He received the "Order of the Honorary Horse Collar Knights'' from the University of South Finland in Kuppio, where he traveled 12 times as an invited speaker at the International Puijo Symposium in Kuppio. He impacted many students and faculty members during his career at the University of Minnesota, including serving as advisor to 26 doctoral students and 32 masters students, along with informally advising many other students who came to his office for advice. A significant number went on to their own highly exceptionable professional careers. The family sincerely thanks all of the staff at the Park Nicollet cardiology service and the Park Nicollet Methodist Hospital Hospice staff for their incredible care and support. Contributions in Art's memory can be sent to the Woundedwarriorproject.org or the Ragom animal rescue service (Retrieve a Golden of the Midwest). Arthur’s U of M page: https://www.cehd.umn.edu/kin/people/leonx002/ Video tribute: https://animoto.com/play/eOxqQMvZPMNOeRubD0iJXw Harry Leon’s obituary: https://www.dignitymemorial.com/obituaries/atlanta-ga/harry-leon-10584235

The family of Arthur Leon created this Life Tributes page to make it easy to share your memories.