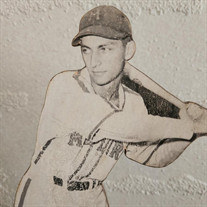 Lehrman, Arnold 'Butzie', age 99, of Saint Louis Park, died peacefully at home of natural causes. Butzie was a loving husband, father, brother, uncle, grandfather, great-grandfather, and friend. He is preceded in death by his loving wife, Helen; parents, Sam & Bella; brothers, Ray (Dorothy) and Morris (Sandy); sister, Evelyn Flom; and significant other of 20+ years, Nancy Gordon. He is survived by daughter, Sandra Neren; son, Jerry Lehrman (Kathy Albergotti, significant other); former daughter-in-law, Nancy Lehrman; brother-in-law, Harvey Flom; grandchildren, Uri, Zack (Barb), & Jeremy (Siyanny) Neren, Matt (Greta Liebo), Cory, & Joey (Christin Smith) Lehrman; great-grandchildren, Oscar & Violet Neren, Jaxon & Cameron Neren, Leniyah & Len Chan, and Maia Lehrman, Sally Gordon and Gaylen Benson; and many nieces and nephews. Butzie was born in Winnipeg, Canada, and grew up on the north side of Mpls. During a time of depression and adversity, the family was poor in possessions, but rich in love of each other and their community. His athletic ability began to flourish at an early age. He went on to attend the University of Minnesota and was a captain of both the Golden Gopher Basketball and Baseball teams. He also played for the Minneapolis Millers, batting .400 as a switch hitter (“.200 from each side of the plate”). He was a lifelong golfer, shooting his age regularly starting at age 75. Butzie built a successful CPA practice (Lehrman, Lehrman & Flom) with his brother and brother-in-law and built a great life for his family. Butzie was the life of every party because of his outgoing charismatic, positive personality and wonderful sense of humor. He also had an incredible memory, often reciting the entire Gettysburg address, even until his late 90’s. He was of sound mind and body until his late 90’s and went to work every day until the age of 93. Butzie was a wonderful man, and he will be dearly missed. The family is extremely grateful to his primary caregiver Marlene, and assistants Carla, Trish, Nikia, and Trishanna for the loving care they gave him. Zoom funeral service 1:00 pm MONDAY, April 11th and zoom Shiva service 7:00 pm, MONDAY, April 11th; send an email to [email protected] for the link.

The family of Arnold Lehrman created this Life Tributes page to make it easy to share your memories.