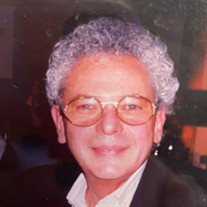 Arnold “Arnie” Lewis Burton, was born on February 15, 1939 to Dora and Ben Burton, and passed away on November 21, 2021 at the age of 82. He was raised in St. Paul’s West Side, and graduated from Central High School in 1957. He moved to California in the early 1960s, then to Long Island, NY until 1992. Arnie returned to Minneapolis and formed a successful industrial marketing business, and he was passionate about his work. A friend to the jazz community, he was best known for his love of music. Humor was important to Arnie, and he always had a funny story, a quip, a Yiddish phrase, and a great laugh. Arnie was preceded in death by his parents, his brothers Marvin “Ronald” and Myron “Jerry,” and his grandson Jacob Daniel Turner. He is survived by his daughters, Lisa Centola and Julie Turner; sons Steven Burton and Michael Burton; and six grandchildren. A very special thank you to Diana Mini and Llyana Mele, his extraordinary and amazing friends and guardian angels. Last, but not least, the exemplary and highly compassionate care Arnie received from the staff at NC Little Hospice in Edina for his end of life comfort is not to go unnoticed. Funeral service 11:00am TUESDAY, November 23rd at SHAREI CHESED CONGREGATION, 1712 Hopkins Crossroad, Minnetonka. Masks are required at the funeral and Shiva. The funeral will also be available via zoom. Email [email protected] for link. Donations preferred to NC Little Hospice or to donor’s favorite charity. SHIVA, 7:00pm Tuesday at 13515 Westernesse, Minnetonka, and Wednesday 5:00pm at Sharei Chesed Congregation Wednesday's Shiva will be streamed.

The family of Arnold L. Burton created this Life Tributes page to make it easy to share your memories.