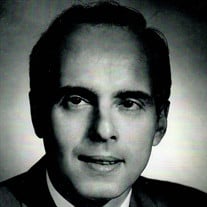 Dr. Arnold Elvin Aronson, died on November 1, 2018, surrounded by his family at home in Minneapolis after suffering from a recent stroke and congestive heart failure. He was born on 8/11/1928 in Milwaukee, WI. Arnie was preceded in death by his wife, Sylvia (Levine) Aronson; and by his parents, Jack and Jean Aronson; and his sister, Muriel Pories. He is survived by daughter, Ann Aronson (Jack El-Hai); daughter, Diane Aronson (Richard Woldorsky); granddaughters, Natalie and Sasha; nieces, Susan, Mary Jane, Carolyn, Kathy; and Tali and nephew, Mark; sisters-in-law, Sally Levine and Dina Levine; longtime cherished caregiver, Bob Hinck; and his beloved companion, Madeleine Wright. Arnie received a B.S., M.S., and Ph.D. in Speech Pathology from the University of Wisconsin, Madison, which is where he met Sylvia, with whom he was married for 56 years. He proudly held the rank of Lt. Col. in the U.S. Army Medical Corps. Arnie became a Professor of Speech Pathology at Mayo Medical School in Rochester, Minn., in 1962 and became Head of the Section of Speech Pathology, Dept. of Neurology, Mayo Medical Clinic. He was also Professor and Emeritus Consultant in the Division of Speech Pathology at the Mayo Clinic and Mayo Medical College. He was a giant in neurology and speech pathology who improved the lives of thousands of patients. His pioneering work in motor speech disorders defined the field and influenced the diagnosis and care of patients for a half century and beyond. Arnie was a lover of life and his family, aviator, reader, violinist, artist, tap dancer, deli food epicure, and appreciator of history, animals, thunder and lightning, and a really good (or really bad) joke. He overcame physical disability in middle age to continue to charm his family, many friends, students, fellows, and patients. A man of action, Arnie often said, “If not now, when?” Funeral services will be held at 2:00 PM on SUNDAY, NOVEMBER 4, 2018 at TEMPLE ISRAEL, 2323 Fremont Avenue South, Minneapolis. SHIVA will be held Sunday evening, November 4th at 6:00 p.m., at 2440 Humboldt Avenue South, Minneapolis. Memorials preferred to the American Speech-Language-Hearing Foundation, 2200 Research Blvd., Rockville, MD 20850, www.ashfoundation.org; the MacPhail Center for Music; or the Animal Humane Society.

Dr. Arnold Elvin Aronson, died on November 1, 2018, surrounded by his family at home in Minneapolis after suffering from a recent stroke and congestive heart failure. He was born on 8/11/1928 in Milwaukee, WI. Arnie was preceded in death by... View Obituary & Service Information

The family of Dr. Arnold Elvin Aronson created this Life Tributes page to make it easy to share your memories.