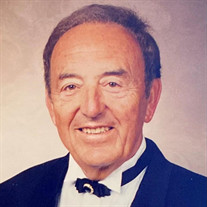 Dr. Alvin Sheldon Zelickson "Al", Age 91, of Golden Valley, Minnesota, passed away peacefully surrounded by family on May 30, 2021. Born May 13, 1930, raised in Minneapolis, Al was an active member of the community and called Minnesota his home. A highly respected and distinguished physician, Twin Cities businessman, and philanthropist, his favorite job title was, Papa. Nothing made him happier than spending quality time with his loving family. A 1948 alum of Minneapolis’ North High School, he also attended undergraduate and Medical School at the University of Minnesota, graduating in the top of his class. Upon graduation, he secured a prestigious internship at Kings County Hospital in Brooklyn, New York. From 1957 to 1959, he served as a Lieutenant in the United States Navy and was the Medical Doctor at Parris Island Marine Base in Beaufort, South Carolina. Dr. Zelickson did his residency in Dermatology at the University of Minnesota, started his private practice, Skin Specialists, Ltd, in 1959 and became a professor and clinical instructor of dermatology at the University of Minnesota, as well. Al loved his medical work and was, “known for his incredible memory and clinical acumen,” according to Terry Rivard, his devoted assistant of over 50 years. Skin Specialists, a thriving and acclaimed medical practice, was located throughout the Twin Cities in the Medical Arts Building in downtown Minneapolis, Edina and the Medical Building of Wayzata. He loved his patients who came from all around to see Dr. Z. and one of his many joys was to pass the reins of his practice to his son, Dr. Brian Zelickson. With an award-wining grant from the National Cancer Institute, Dr. Zelickson, at the age of 31, made a name for himself in the field of dermatology based on the pioneering work he conducted in Electron Microscopy and his study of skin cancer cells. Recognized for his accomplishments, Al lectured at numerous medical conferences throughout the United States and in Europe. He wrote many medical articles, text books on multiple subjects including, virus-caused tumors, and drugs that cause eye and skin changes. Dr. Zelickson was recognized for several years as one of Minnesota’s Top Doctors, and was on staff at Mount Sinai, Abbott, Fairview, the former Minneapolis General Hospital, now HCMC, and was at one point a MN Twins baseball team doctor and medical advisor. He was a member of the Noah Worcester Dermatological Society, the American Dermatological Society, Oak Ridge Country Club, Lafayette Club and Temple Israel and served on numerous medical and corporate boards. Al was 91 years young, and didn’t believe in retirement. He loved putting on a suit and tie and going downtown to work. So, when he stopped practicing medicine in 2015, he relocated to a new office only 4 floors down in the same building of his medical practice of over 50 years, and expanded his many real estate, business and investment opportunities that had already been established during his six-decade career. Working every day until the end, he was delighted to mentor and share his wisdom in business with his grandchildren as well. Al liked to play too. He was an avid tennis player and taught his grandchildren the sport, making it three generations of fun. He enjoyed taking his family on many trips around the world, and was equally fond of spending time on Lake Minnetonka together. The love of his life, wife Sue, of 64 years, gave his world meaning and also kept him very busy supporting charity benefits, art exhibits and his favorite - attending restaurant openings throughout the Twin Cities. He cherished and loved his family more than anything, spoke with his two sons, Barry & Brian each morning, enjoyed his regular family dinners, had his four grandchildren on speed dial, for “Papa Chats” and provided fatherly advice and support in all things. He credited his personal and professional success by saying, he was very lucky, but “Hard work pays off and knowing what you’re doing helps!” He will be remembered by all for his love of family and friends, and a life well-lived. He was preceded in death by his father, Max Zelickson, mother, Dinah Kaplan Zelickson Wolson, brother-in-law, Robert Gordon and sister-in-law, Judy Wolson. Survived by wife, Sue Zipperman Zelickson; sons, Barry (Lisa), Dr. Brian (Mary McCarthy); grandchildren, Zachary, Nicole, Eve and Arlo Zelickson; sister, Baylee Gordon; brother, Elliot Wolson; sister-in-law, Connie (Dr. Myron) Samovitz and many nieces, nephews and special friends. Our family gratefully thanks North Memorial Hospital’s ICU and Regency Hospital’s medical staff for their compassion and expertise during this difficult time. A private family service and interment was held at Lakewood Cemetery, no Shiva. In lieu of flowers, donations in memory of Al to the donor’s choice, or to: Perspectives – Kids Cafe, 3381 Gorham Avenue, St. Louis Park, MN 55426 or to Temple Israel, 2324 Emerson Ave So, Minneapolis MN 55405 https://www.perspectives-family.org/kids-cafe or https://www.templeisrael.com/

Dr. Alvin Sheldon Zelickson "Al", Age 91, of Golden Valley, Minnesota, passed away peacefully surrounded by family on May 30, 2021. Born May 13, 1930, raised in Minneapolis, Al was an active member of the community and called Minnesota his home.... View Obituary & Service Information

The family of Dr. Alvin "Al" Sheldon Zelickson created this Life Tributes page to make it easy to share your memories.