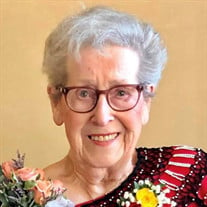 Alice Joyce Phillips was born in Liverpool, England, the third child (of four) and only daughter of Charles John “Jack” and Alice Woodland Phillips. As a girl and young woman, she lived through the Depression and World War II (including the Blitz) and soon after the war married, briefly, an American GI and emigrated to Sioux Falls, South Dakota. In 1949 she married Hans Nauen, a German Jewish refugee and the love of her life. She embraced his daughter, Edie, and his religion, becoming a lifelong, active Jew. Her survivors include their four children: Lindsay (Richard Weil, Noah and Ben Weil), Elinor (Johnny Stanton, Tara Lannen-Stanton), Charlie (PJ Pofahl, Rachel and Hannah Nauen), and Varda (Jeffrey Burton, Zoe and Henry Burton), Edie’s daughter Ilona Mettala (Marty Hindsley), uncountable cousins and other family members, great-grandchildren, friends, admirers, and “adopted” children. Her accomplishments were many and varied. She was a bronze life master in bridge, only 14 points shy of silver. She was president of the NAACP in Sioux Falls and a Weight Watchers regional director, and she recorded books for the blind (they loved her English accent and perfect diction). A trained musician, she starred as Golde in a Sioux Valley Auxiliary production of Fiddler on the Roof, sang at many weddings, and played organ and sang for Mt. Zion ( MtZionSF.com ), her home synagogue in Sioux Falls, for 30 years. Visiting London in 1980, Joyce was impressed by the work of the Memorial Scrolls Trust in repairing Torah scrolls saved from the Nazis, and was the prime mover in bringing one of those scrolls to Mt. Zion. The fact that she wasn’t an American citizen didn’t stop her from taking a passionate and knowledgeable interest in politics, but in 2016, at age 92, she became a citizen in order to vote for a woman for president. In 1984, after several years as snowbirds, she and Hans moved permanently to Sun City West, Arizona, where he died in 1986. She lived there into her 90s, when she moved to St. Paul, Minnesota, to be closer to family. She survived Covid last year, and died peacefully and unexpectedly in her sleep in the early hours of August 26, 2021. Her family invites you to honor her life by, most of all, embracing open-mindedly and with good humor everyone you meet, and by donating to causes that support justice, Judaism, art, and music. They only wish they could convey the extent of their gratitude to Sholom Home (sholom.com) and Joyce’s loving, skilled caretakers there. Private interment service to be held Tuesday in Sun City, AZ. Memorial service to be held 1:30 pm THURSDAY September 2nd at MOUNT ZION TEMPLE, 1300 Summit Ave., St. Paul. The memorial service will not be available via zoom, only live streaming which can be accessed on www.mzion.org. SHIVA 7:00 pm Thursday evening at Mount Zion Temple. Shiva will also be available on zoom. Email [email protected] for link. Masks are required when attending the memorial service and shiva at Mount Zion Temple.

Alice Joyce Phillips was born in Liverpool, England, the third child (of four) and only daughter of Charles John &#8220;Jack&#8221; and Alice Woodland Phillips. As a girl and young woman, she lived through the Depression and World War II (including... View Obituary & Service Information

The family of Alice Joyce Nauen created this Life Tributes page to make it easy to share your memories.

Alice Joyce Phillips was born in Liverpool, England, the third...